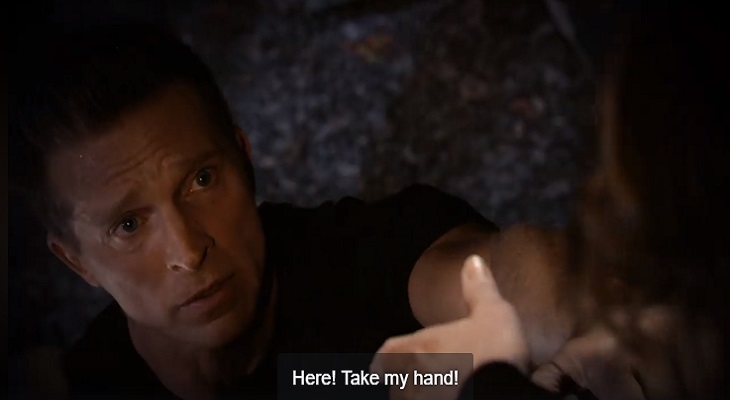 General Hospital spoilers tease several romances will be heating up, as well as lots of twists and turns and bumps in this week’s General Hospital! A new GH Facebook promo called “Graceland Super Tease” spells it out.

First, the heat! Maxie Jones (Kirsten Storms) and Peter August (Wes Ramsey) seem to finally be heading towards the next level in their relationship after Maxie “consults” Nathan West (Ryan Paevey) at a cemetery meeting, after Peter encourages her to let Nathan “tell her” when it’s time to move on from him.

According to General Hospital spoilers, things heat up between Chase (Josh Swickard) and Willow Tait (Katelyn MacMullen) as well, and Jason Morgan (Steve Burton) and Sam McCall (Kelly Monaco) share a steamy shower and take their relationship to the next level, much to the delight of JASAM fans!

Truths are revealed to others and to themselves as some Port Charles residents are honest with themselves. Sonny Corinthos (Maurice Benard) finally admits to himself that his dad, Mike Corbin (Max Gail) is too far gone mentally to care for him at home anymore, and makes the difficult decision to let him go emotionally.

Meanwhile, it looks like Willow confesses the truth about giving her child up for adoption to both Chase and Michael Corinthos (Chad Duell). Lucy Coe (Lynn Herring) tells her version of the truth about Ava Jerome (Maura West) to Ava, while Curtis Ashford (Donnell Turner) wants to have an honest talk with Marcus Godfrey (Nigel Gibbs) about his Auntie Stella (Vernee Watson).

General Hospital comings and goings show Robert Scorpio (Tristan Rogers) arrives in Port Charles to help seek out the truth about how and who caused Anna Devane (Finola Hughes) to contract the virus that caused her vitreous hemorrhages.

Now, for the danger! Carly Corinthos (Laura Wright) and Kim Nero (Tamara Braun) worry about Oscar (Garren Stitt) and Joss (Eden McCoy) after they apparently are late coming home and they haven’t heard anything from them.

Meanwhile, the kids have gotten lost in the catacombs, where there are no cell phone signals, and Oscar apparently has a seizure and collapses! Sam and Jason rush to rescue them, but then Jason falls on a tall ladder backwards onto the floor!