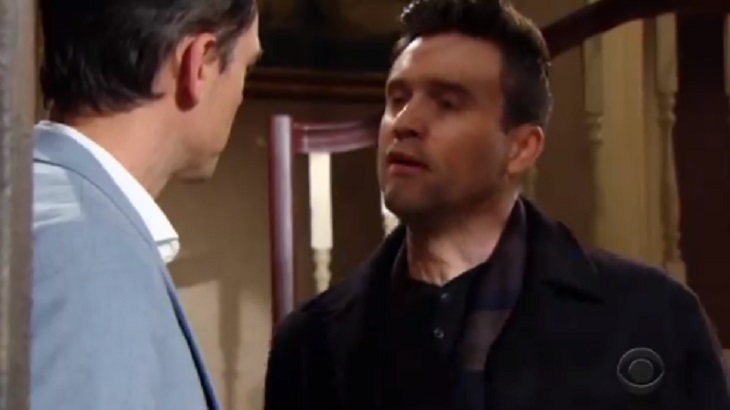 In old school terms, Billy (Jason Thompson) is a tattletale on ‘The Young and the Restless’. He has no real right to tell Lily (Christel Khalil) what Cane (Daniel Goddard) did with Victoria (Amelia Heinle), but does so anyway.

Feeling virtuous, Billy drove directly to Lakewood Prison after Vickie told him that she and Cane had kissed on more than one occasion. Reverting to his trouble-making ways, Thompson’s ever-uneasy character then told that tale to Lily in order to further a larger agenda, payback.

Billy believed, naturally, that he and Vickie were on relationship repair road. A classic winter pot hole emerged when lo and behold Cane, yes, Cane, was caught smooching on Vickie’s sofa, similar to what ‘Sharlie’ did at Devon’s (Bryton James) penthouse months ago. Of course Charlie (Noah Alexander Gerry) and the now Colorado-based Shauna (Camryn Hamm) are high school students.

Was it necessary for Cane to tell his brother-in-law what happened, by they way? Devon seems to have just pulled himself up from the depths of despair after suffering the loss of what would have been his first-born baby. Then, the erratic Mr. Ashby dumps that incredibly ‘Vane’ news on Lily’s brother!

So, Lily is told what happens and Cane finds out. Goddard’s character tracks his step-brother down and punches him in the face, which includes a great point-of-view camera shot.

The recent return of Khalil (who’s currently working on a recurring contract) to the screen is welcomed, within this part of the plot line that feels forced. Lily’s Genoa City ties run deep and the actor who’s played her since 2002 is well-liked by a wide segment of the audience.

Young And The Restless Spoilers – Cane And Victoria’s Strange Connection

Fictionally speaking, what’s odd is that Billy loathes Cane as much as Victoria. So the idea that she would suddenly be romantically interested in this particular guy is rather preposterous.

Y&R’s viewers share Billy’s stunned demeanor and may have tattled to Lily themselves if that jailhouse visitor’s room scene was written into the script for any one of them to play out. How many of those soap supporters sympathize with Cane, and thereby would have played the puncher instead, is a different daytime question.