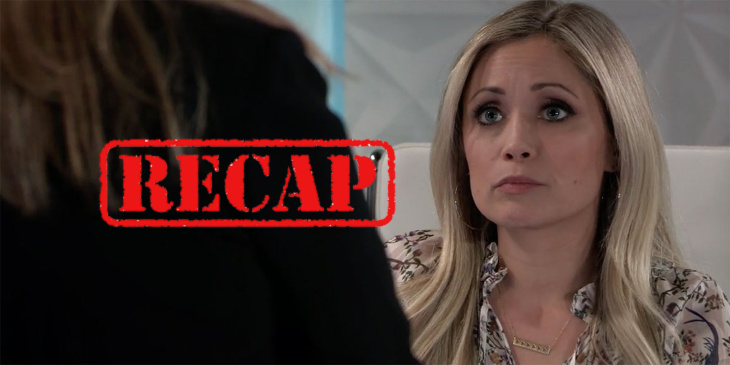 Maxie (Kirsten Storms) and Nina (Michelle Stafford) decide it’s time to introduce Lucy who arrives with two bodyguards. Lucy says her guards are there to help the PCPD protect the citizens. Lucy asks Felicia (Kristina Wagner) if she knows if Kevin (Jon Lindstrom) is coming. Lucy begins to talk about Sonny (Maurice Benard). Lucy brings up stuff about everyone else’s past but doesn’t mention hers. Bobbie brings up Lucy’s and tells her to wait until she finds out who Kevin is with now. Lucy reads an excerpt about Valentin (James Patrick Stuart) and Nikolas (Nick Stabile). Maxie wants Lucy to read a happier story.

Lucy reads about Faison (Anders Hove), and Peter (Wes Ramsey) tries to stop her. Maxie stops Lucy, and she moves on to B.J. (ex-Brighten Hertford)and Maxie. Maxie comforts Bobbie, but both are visibly upset. Maxie and Felicia talk about it being her anniversary. Maxie isn’t sure if she’s ready to move on, Felicia tells her it is ok either way. Maxie excuses herself, and there is something she needs to do. Willow (Katelyn MacMullen) and Chase (Josh Swickard) make a run for it and leave the party. Laura (Genie Frances) asks Curtis (Donnell Turner) if he has heard from Jordan (Briana Nicole Henry) and commends him on finding the connection between Ryan (Jon Lindstrom) and the serial killer.

We wouldn't cross Ryan if we were you… @thejonlindstrom #GH55 pic.twitter.com/X9G6m9ZXMH

General Hospital’s Ryan plans to meet with Carly (Laura Wright) and Sonny. Sonny comes downstairs, and Carly wants to talk about Mike (Max Gail). Sonny is ready to go to the book signing, Carly wants to go to the appointment with Kevin. Sonny tells Carly he doesn’t need a shrink to deal with this. Sonny went upstairs, and Mike seemed fine. Carly tells Sonny that ignoring this doesn’t help anyone including Mike. Sonny thought Carly was mad at Kevin.

Carly says Kevin called and apologized and he was a big help to her at Ferncliff. Carly tells Sonny she’s not going to let this tear them apart and begs Sonny to do this with her. Sonny and Carly go to Kevin’s office, and Sonny tells Ryan he knows he wants to leave town with Ava (Maura West) and he’s not going to allow Ava to take Avery (Ava and Grace Scarola) out of town because he’s afraid she will disappear.

Missed an episode? Not to worry! Full episodes of #GH are just a click away: https://t.co/uMgkbTaTwK

Ryan asks if they are there to talk about Ava, Carly says no and begins to discuss Mike. Ryan has a knife in front of him with his hand on the handle. Sonny and Carly tell Ryan about everything that is going on with Sonny and Mike. Ryan says it is about Morgan (ex-Bryan Craig) this is about the son that they couldn’t save. Ryan suggests Carly and Sonny talk to Morgan to deal with Mike. Ryan tells Sonny and Carly to call if they need a follow-up appointment. He picks up the knife and says he doubts they will need one.

General Hospital’s Lulu (Emme Rylan) is working on a story but won’t tell Laura what it is. Laura tells Lulu she needs to be more careful, that door should be locked. Lulu says Laura must be cursing this fate. Laura is cursing the serial killer. Laura says if the killer is copying Ryan she wonders if there will be six more killings. Laura tells Lulu she saw a list of Ryan’s victims on Kevin’s desk. Lulu asks why Kevin had a list of Ryan’s victims, and Laura gives her his excuse.

Lulu tells Laura to go to the signing; Lulu promises to be there as soon as she finishes her story. Lulu talks to Dante (ex-Dominic Zamprogna) and tells him where the kids are. Dante says he might not be reachable for a while because they are closing in on their target. Lulu tells him they love and miss him and she hangs up the phone. Lulu calls Peter’s phone and begs him to reconsider the story on Ryan. Ryan refuses to let Lulu do the article. Ryan goes to see Lulu about her call. Lulu lets him into her office, and he closes the door behind them.

General Hospital’s Valentin asks Nina if she’s ready to marry him again. Maxie interrupts and tells Nina to help her with her parents. Nina tells Maxie Valentin asks her to marry him again; she asks if Maxie will be mad if she said yes. Peter brings them drinks and Maxie sends him away. Maxie tells Nina to follow her heart. Nina says her heart is an idiot. Maxie assures Nina they will always be family.

Valentin asks if Nina is avoiding him, she says she needed time to think. Nina tells Valentin most of their issues happened while they were married. Nina asks Valentin why they would want to do that again and tells him she wants to go home.

General Hospital’s Ava stops by Kevin’s office to see if he’s had a chance to talk to Sonny and Carly. Ryan tells her he ‘s meeting with them in a few minutes. Ava informs him she’s going with him and isn’t going anywhere. Ava is determined to be there to help deal with Sonny and Carly. Ryan convinces Ava to meet him at the book party. Lulu has left a message for Kevin about Ryan’s victims. Ava approaches Lucy who says she doesn’t remember inviting her. Lucy tells Ava to stop spreading lies about being involved with Kevin. Lucy tells her if she is involved with him there are a few things she needs to know.

General Hospital’s Nina talks to Curtis about his drink. Curtis asks if this is permanent or does she have a backup wardrobe downstairs. Nina asks Curtis to do like Maxie and be happy for her. Chase and Willow talk about the book and running together. Chase tells her he spends time with her brother sometimes. Chase wants to know who Willow spends time with away from school.

Peter approaches Mac and tells her that hearing about the heart transplant proves how important Maxie is to all of them. Peter assures Mac (John J. York) that he killed the serial killer article. Lucy keeps trying to figure out who Kevin is with, Felicia refuses to tell her. Laura arrives and asks if Bobbie is ok. Laura and Bobbie talk about their past Lucy discussed in the travel guide.

Felicia is getting more upset by the minute, Lucy walks over and asks if she is mad at her. Felicia tells Lucy she has brought up a lot of things from the past that she didn’t want drug up. Ava walks into the book signing, and Felicia points out that Ava is who Kevin is with now. Lucy can’t believe Kevin is with Ava.