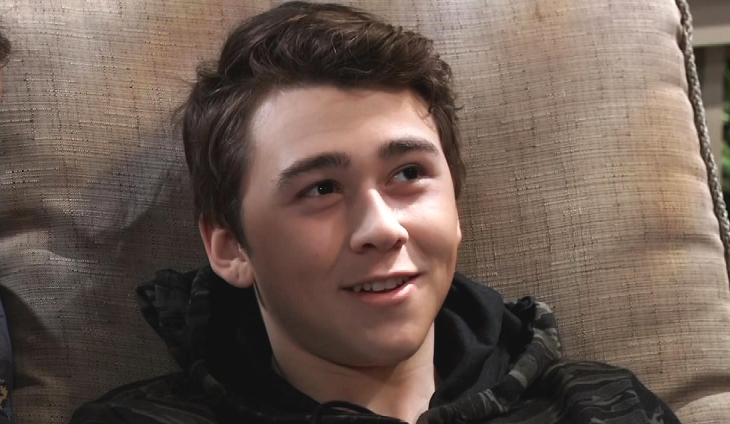 General Hospital spoilers tease there appears to be an oddly worded spoiler shown on various places around the Internet about Oscar Nero Quartermaine (Garren Lake Stitt).

It says “Oscar has a full day planned.” It doesn’t seem to be a misprint of an earlier General Hospital episode, but other spoilers for the same day might give viewers a clue about what this might really mean.

Another General Hospital spoiler for May 13 teases that Cameron Webber (William Lipton) rises to an occasion. It could be speaking at a memorial service about his friend. Another says Oscar’s mother, Dr. Kim Nero (Tamara Braun) will be emotional, which of course would be expected.

There is another rumor that indicates Oscar wishes his dad, Drew Cain (Billy Miller) and his uncle, Jason Morgan (Steve Burton) would get along. But he already told them that before he died. Perhaps he reiterated his wishes on the memorial tape he had Cameron help him make and the tape is played at the memorial service.

Since General Hospital viewers don’t really know how many scenes Garren Lake Stitt filmed before his TV death on General Hospital, it is possible he could be shown as a ghost, possibly comforting Joss or looking in on his memorial service.

General Hospital has done this many times before, as viewers have seen in past episodes of Nathan West (Ryan Paevey) comforting Maxie Jones (Kirsten Storms). Or Maxie’s sister Georgie Jones (Lindze Letherman) being close by Maxie’s side in her times of need.

Dr. Monica Quartermaine (Leslie Charleson) has also received ghostly visits from Dr. Alan Quartermaine (Stuart Damon). Another way this spoiler could be taken is that perhaps Joss will look at the planner she and Oscar had and see that they had filled out this date with a lot of things to do together.

However, the other spoilers for May 13 seem to support the idea that this episode involves things relating to Oscar’s memorial service. More information should be available as we get closer to the date.