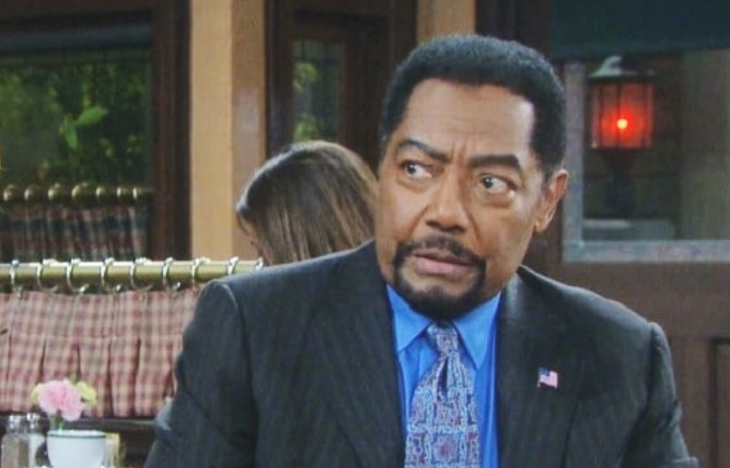 Longtime viewers will recall Abe Carver was a Salem police officer who was one of the first African-Americans on the force. He was one of Salem’s finest for many years. He rose up the ranks to become the Police Commissioner.

In 2008, he became frustrated with the amount of corruption in the Salem City Government, He ran for Mayor and served a four year term. He was defeated by EJ DiMera (James Scott) in 2011. In 2015, he was asked to take over as Mayor again and he has been Mayor of Salem ever since.

Days Of Our Lives Spoilers – Overly Aggressive And Dirty Politics

As Days of Our Lives viewers know, in the current mayoral race Abe has been attacked by Jack Deveraux (Matthew Ashford) and his aggressively ambitious wife and campaign manager Eve Donovan (Kassie DePaiva). They have used dirty politics tactics, otherwise known as mudslinging, against him.

Days Of Our Lives Spoilers: Tripp Encourages Off The Rails Claire To Seek Counseling

Haley Chen (Thia Megia) has been made a scapegoat to prove that Abe is lax on illegal immigrants. Jack Deveraux accused him of sexual harassment of his employees by sneaking a photograph of Sheila Watkins (Tionne Watkins) kissing him and showing it publicly.

This caused Sheila to quit her job and leave town. Valerie Grant (Vanessa A. Williams), who had come to visit, was offended and distrustful. Poor Abe lost two important women in his life and career, mainly because of Jack and Eve’s mudslinging campaign!

Days Of Our Lives Spoilers – Will Abe Carver Be Defeated?

The pair will probably cite the kidnapping and presumed death of Holly Jonas (Scarlett and Harlow Mallory) as another failure of Abe’s. They will say he did not crack down on crime and caused a child to be killed. Whether Jack or someone else totally unexpected defeats Abe or not, remains to be seen.

But it does seem certain the office of Police Commissioner will come open. And Abe will probably be more than happy to fill it if he’s needed, and not re-elected as Mayor.

Jack's doing well in the polls but what about in his marriage? #DAYS pic.twitter.com/Jk4h92RQj4