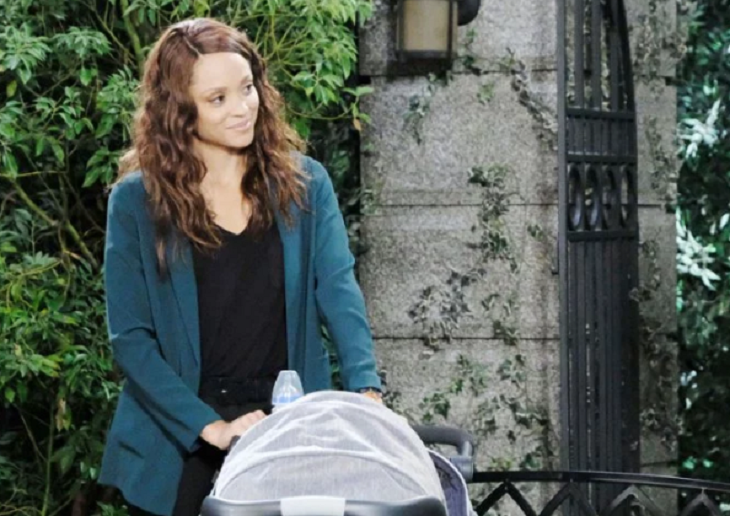 Days of Our Lives (DOOL) spoilers tease that Lani Price (Sal Stowers) will be feeling protective. She’s been taking care of Jordan Ridgeway’s (Chrishell Hartley) baby, David, and she’s been a little too into it. As DOOL viewers know, Lani has just taken a leave of absence from the police force in order to care for David full time.

But soon, someone else will start to take an interest in David, and that’s Ben Weston (Robert Scott Wilson). Ben has been busy searching for Holly Jonas (Harlow and Scarlett Mallory), who went missing from the DiMera mansion. But once that ordeal is over, Ben will start thinking about his little nephew once again.

According to Days of Our Lives spoilers, Ben will decide that he wants to be a part of David’s life. He won’t suggest that he help raise his nephew, but it looks like he will want at least some contact with the little boy. And Ciara Brady (Victoria Konefal) will support his efforts to connect with David and encourage him to do so.

But it seems that Lani will have other plans for David. She won’t be happy to learn that Ben wants to see the little boy, whom she’s grown quite fond of. Sure, Rafe Hernandez (Galen Gering) has been helping out, but Lani has really carried most of the childcare on her own. According to DOOL spoilers, she’ll even move into Rafe’s house to be closer to David.

At any rate, Lani’s response to Ben’s request to see David will be a big NO. But Ciara won’t be happy with that state of affairs, so she’ll go to Lani herself and lobby on Ben’s behalf for time with David.

Ciara will probably argue that Ben has every right to see his nephew, but DOOL spoilers say that Lani will tell Ciara a big fib to keep Ben away from David.

Days Of Our Lives Spoilers – Can’t Keep Him Away Forever

Exactly what Lani tells Ciara remains to be seen, but it will apparently work to prevent Ben from being able to see the little boy, at least for the time being. It’s hard to imagine that Lani will be able to keep David away from Ben forever, but it looks like her lie will do the trick for now.

Days of Our Lives Spoilers: Maggie And Victor At War Over Holly’s Death https://t.co/5WspF9rKw2 pic.twitter.com/94C22MAKeG

We’ll see what happens with David going forward. It certainly looks like Lani is getting very attached to him, but at some point Jordan will be recovered and out of Bayview, and she’ll want her baby back. It could be a difficult separation for Lani when that happens. Do you think that Lani is getting in too deep with David?