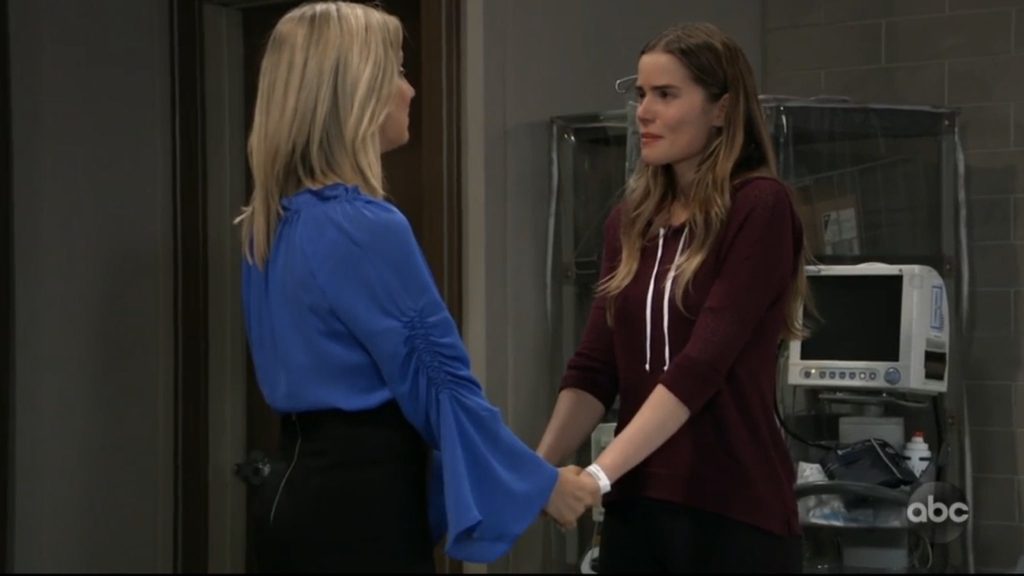 At Kim Nero’s (Tamara Braun) apartment she answers the door and it’s Franco Baldwin (Roger Howarth) aka Frankendrew. Franco says she is suffering another loss, but Kim says she knows Drew and believe he could have survived.

At General hospital (GH), Nina Reeves (Cynthia Watros) is explaining to Valentin Cassadine (James Patrick Stuart) about the Deception job opportunity for Sasha. Liesl Obrecht (Kathleen Gati) chimes in and says they must realize that her life will be under a microscope if she takes the job.

Laura and Curtis apologize and quickly leave the estate room where they found Lulu and Dustin having sex. On the deck of the Haunted Star, Laura catches her breath and her and Curtis discuss how quickly Lulu has  – moved on.

Lulu barrels over to them and says she is moving on with her life, Dante drove her to this.

After getting caught by her mother, Lulu Falconeri (Emme Rylan) and Dustin Phillips (Mark Lawson) are mortified they were walked in on. Lulu gets dressed and runs out to find her mother while Dustin waits in bed.

Nina continues to go on and on about the possible job for Sasha at Deception. Valentin Cassadine (James Patrick Stuart) and Liesl Obrecht (Kathleen Gati) weigh in and say she needs to see the pros and cons first.

Michael says there were multiple DNA tests and Sasha says it’s all a lie, the results were manipulated.

Michael wonders why she would do this and she admits she needed the money. Sasha confesses that Valentin is the one who hired her to trick Nina. Michael gets angry and says he cannot believe that she lied to him.

Franco Baldwin (Roger Howarth) continues to questions Kim’s decision to leave Port Charles. Kim tells Franco again that he is not Drew Cain and he admits that he still loves her. Franco picks up a snow globe that he bought for her when he was “Drew.”

There’s a knock on the door and its detective Harrison Chase (Josh Swickard) to see Franco. Chase says the judge dismissed the charges and he is free to go. Chase leaves and Franco keeps pushing that they should go away on a trip.

At General Hospital, Liesl approaches Brad Cooper (Parry Shen) and says she needs him to do her a favor. She grabs Brad’s arm and asks him to reunite her with her daughter Brita. Brad says he will not do what she is asking, but she reminds him that she knows the Wiley secret.

Curtis tells Lulu that her mom is helping him on a case, they need to search the Haunted Star.

Michael storms out of the hospital room and Nina comes in to comfort her.

Brad meets with Julian and reminds him of what Liesl is holding over their heads. Brad distracts Liesl while Julian messes with her car.

Kim says she will not betray her friend Liz and she is in love with Julian. Kim stops Franco while he is leaving and they begin to kiss passionately…….flash to preview!

Stay tuned weekdays to General Hospital to find out!

Bold and the Beautiful News: The Real Housewives Arrive!