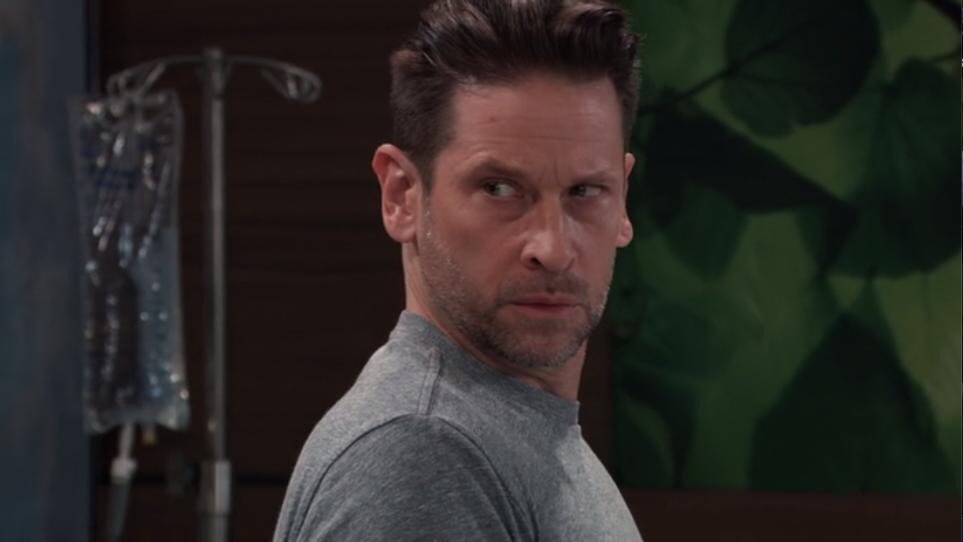 First, Franco Baldwin (Roger Howarth) confesses his love to Kim Nero (Tamara Braun) according to his memories as pre-2012 Andrew Cain (Steve Burton). Franco tells her he’s just as in love with her now as he was the day he shipped out to Afghanistan, and Kim might just feel the same way about him, even though in her mind she knows he is not Drew!

In a stateroom on Lulu Spencer’s (Emme Rylan) boat, The Haunted Star, an embarrassed Lulu scrambles to get dressed as Dustin, still in bed, stifles a laugh when he hears her saying she hopes she can explain it to her mother! As General Hospital viewers will recall from Friday’s episode, Laura Collins (Genie Francis) and Curtis Ashford (Donnell Turner) had come to The Haunted Star looking for the codicil to Mikkos Cassadine’s (John Colicos) will, and walked in on Lulu and Dustin in bed!

Outside the stateroom door, Laura is embarrassed at walking in on her newly divorced adult daughter in bed with a new man, and all she can say to Curtis is, “Oh, WOW”! Will Laura chastise Lulu for moving on from Dante Falconeri (Dominic Zamprogna) so quickly, or will she support her daughter’s need to be happy? General Hospital viewers will likely vote for the second option, although Laura may later give Lulu a talk about the hazards of rebound relationships!

GH Spoilers – Liesl Obrecht Has A Demand For Brad Cooper

Liesl Obrecht (Kathleen Gati) has a demand for Brad Cooper (Parry Shen) probably in exchange for her silence about knowing that Wiley Cooper-Jones (Erik and Theodore Olson) is really Jonah Corinthos! She tells Brad that he is going to reunite her with her daughter Britt Westbourne (Kelly Thibaud)! Viewers will recall in one of last week’s episode how Liesl told Sasha Gilmore (Sofia Mattsson) how much she looked like her daughter Britta; Liesl must be getting lonesome for Britt!

Nina Reeves (Cynthia Watros) thinks that if Sasha took Lucy Coe’s (Lynn Herring) offer to be the “Face of Deception” it would be fabulous! She is enthused about her daughter Sasha being offered such an opportunity and gushes to her fiancé, Valentin Cassadine (James Patrick Stuart) about it! Ironically, Sasha is feeling like a different kind of face of deception because she’s not really Nina’s daughter!

Meanwhile, Sasha is still in a supply room at General Hospital, and starting to cry, tells her boyfriend, who she is fearing will no longer be her boyfriend, Michael Corinthos (Chad Duell) that she is not Nina’s daughter!