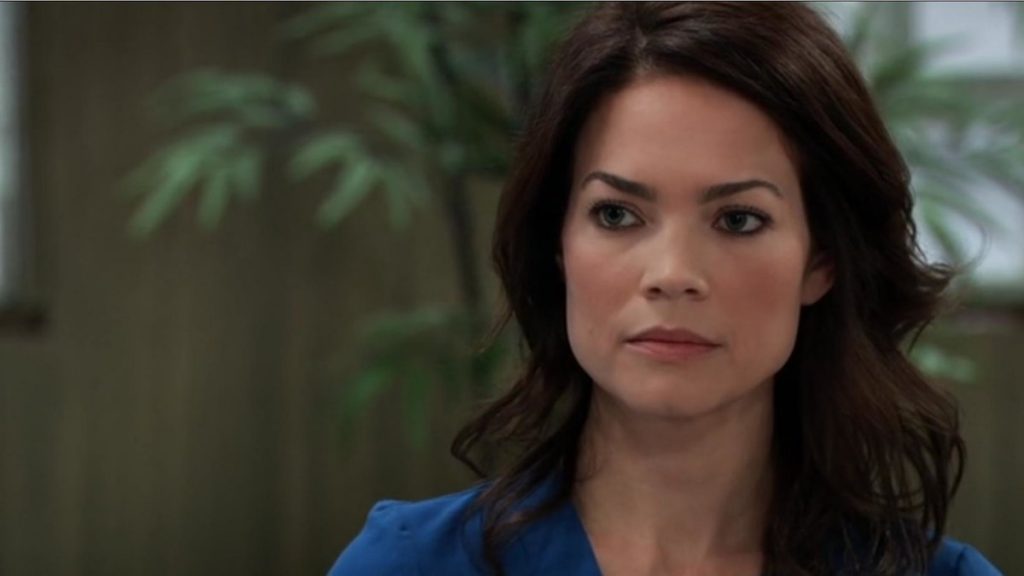 Everything’s going crazy for Elizabeth Baldwin, and her portrayer, Rebecca Herbst couldn’t agree with it enough. Liz has had a wonderful life with Franco Baldwin (Roger Howarth) and her boys, not to mention the couple recently just got married.

However, things have changed drastically thanks to Shiloh Archer’s (Coby Ryan McLaughlin) devious plan, which led to Franco’s memories being wiped out and replaced with Drew Cain’s (Billy Miller). With her husband’s memories gone, she’s now married to a man who has the body of Franco but the memories of Drew. The problem is, Franco no longer wants to be with his wife as he has set his eyes on Kim Nero (Tamara Braun).

In an interview with Soaps In Depth, Herbst said her character’s marriage to Franco was “a lot of fun.” Liz had a happy wedding and reception even though Dr. Liesl Obrecht (Kathleen Gati) was pushed overboard, the event was still a success.

Liz and Franco’s life in Port Charles hasn’t been easy. After their marriage, it seemed like everything was going smoothly. But now, their story has gotten crazy! Herbst said that her character is currently in “fantasy land” thanks to the sci-fi movie story that she’s in with Franco, Drew, and Kim.

GH News – Elizabeth Baldwin Is All In!

She said she’s “all in” as Liz fights for a man who ceased to exist but still sits in front of her. She said, “it’s going to be a struggle.” Before Franco “left,” he promised to return to his family. But with Drew’s memories taking the driver’s seat, it seems that won’t happen anytime soon.

Herbst said, “So it’s all up to Elizabeth. She’s not going to stop fighting to get Franco back. I know Elizabeth is going to love him no matter what… but at some point, if Franco isn’t there, she can’t make another man fall in love with her just because they had history.”

She continued that her alter ego will take action, but a legal one at that since she’s Franco’s wife. But she also noted that Franco/Drew’s connection with Kim goes beyond paperwork.

“For the first time since her Drew Cain has been gone, someone is having the same memories as Kim,” Herbst noted. “I think that’s going to get Kim. So it will be interesting to see where this goes!” she continued.

As a final point, Herbst said she’s going to “embrace” all the drama and that she “looks forward to it.” Spoilers reveal that Franco and Liz’s love for each other will prevail. But how that’ll happen is still yet to be revealed.