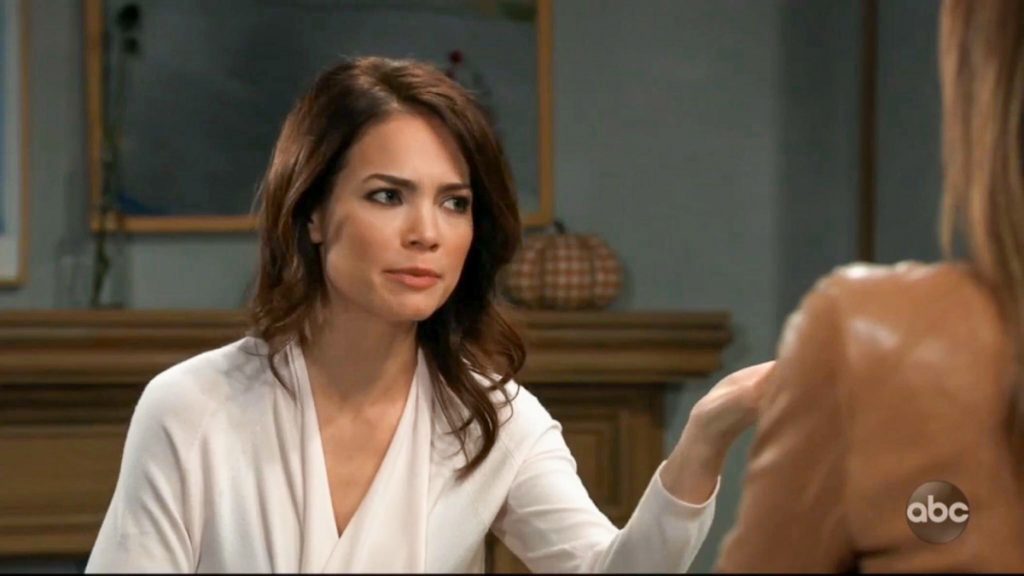 General Hospital spoilers tease that Monday, November 25th’s episode will be full of drama and suspense for GH fans!

TJ Ashford (Tajh Bellow) asks for Stella Henry’s (Vernee Watson) blessing as he tells her that he wants to ask his longtime girlfriend, Molly Lansing-Davis (Haley Pullos) to marry him! Stella doesn’t look too approving when she hears the question, but perhaps she’ll give him her blessing and approval anyway. TJ and Molly have been together for several years and they know each other very well, and know what they want out of life. Both have promising futures, him as a doctor and her as a lawyer. What’s not to like? On the other hand, as General Hospital viewers know, Stella is very picky!

At General Hospital, Elizabeth Baldwin (Rebecca Herbst) talks to Julian Jerome (William DeVry) about Franco Baldwin (Roger Howarth). She tells Julian that there are some things about Franco that he doesn’t know. However, Brad also wants to look into Brad Cooper’s (Parry Shen) schedule, so questions about Franco may just be a way to sneak a peek at the hospital computer!

Elsewhere in General Hospital, in Alexis Davis’ (Nancy Lee Grahn) hospital room, Dr. Neil Byrne (Joe Flanigan) questions Alexis about her activities with Kendra Lennon (Michelle Argyris). He asks Alexis “What exactly do you and Kendra work on?” He suspects Kendra is the one who poisoned Alexis with rat poison! Alexis will think her psychiatrist boyfriend may need to treat himself! She won’t want to believe that Kendra would harm her, especially not intentionally, but then she doesn’t know that Kendra is the much older sister of Kiefer Bauer (Christian Alexander) wanting revenge for Alexis running over and killing him years ago!

At Port Charles High School, Cameron Webber (William Lipton) and Trina Robinson (Sydney Mikayla) approach Dev Cerci (Ashton Arbab). It looks like Josslyn Jacks (Eden McCoy) may be behind them, although the scene shows only her back so it’s difficult to be certain. Trina starts off the questioning with “Dev Cerci, are you Sonny Corinthos’ (Maurice Benard) cousin or not?” It sounds like someone is suspicious of Dev and has been talking to his friends!

Mike Corbin (Max Gail) looks like his Alzheimer’s Disease is in next to end stage as he was living back in his youth in his mind when Stella visited him in Friday’s episode. Mike sits on the couch and looks like he’s dozing off or possibly unresponsive as Carly Corinthos (Laura Wright) asks Sonny why she didn’t tell him what was going on with Mike! It sounds like the couple Corinthos need to work on their communication with one another!