General Hospital spoilers tease that Friday, November 22 will be another exciting day of drama for GH fans, with no drama expected from the Trump impeachment gang!

Anna Devane (Finola Hughes) needs Jason Morgan’s (Steve Burton) help to solve a mystery, in a surprising alliance of spy and hit man! What in the world could Anna need Jason’s help with? It’s possible she may want him to tail Hayden Barnes (Rebecca Budig) and tell her where she goes, who she sees, and what she’s up to, because she absolutely does not trust her with her fiancé Dr. Hamilton Finn (Michael Easton)!

At least it will give Jason something to do besides worry about Sam McCall (Kelly Monaco) and how he’s going to handle being a single father! He may, however opt to refer Anna to Damian Spinelli (Bradford Anderson)! 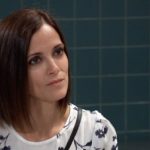 Valentin Cassadine (James Patrick Stuart) wants intel from Hayden Barnes (Rebecca Budig) and it sounds like he’s willing to pay for it; she tells him “when it clears I’ll tell you everything I know about the portrait” so it sounds like he’s writing her a check. It’s doubtful that Hayden will tell him anything truthful (like about the codicil that disinherits him for instance) because if Nikolas Cassadine (Marcus Coloma) doesn’t get his estate and inheritance back, she won’t get her cut either! Clearly she’s stalling Valentin!

Jasper “Jax” Jacks (Ingo Rademacher) is not happy with Nina Reeves (Cynthia Watros) after she told him that she was not intending to go through with the wedding to Valentin after Jax declined her invitation in Thursday’s General Hospital episode. She told him that she was intending to bring Valentin down and Jax gets upset, and shouts at her, asking “Why the hell would you want to do that?” It’s clear that Jax thinks Nina is playing with fire trying to double-cross Valentin!

Sonny Corinthos (Maurice Benard) is upset – make that livid – as he worries to Carly Corinthos (Laura Wright) about someone turning him in! He is upset and shouting as he tells her, “Don’t think for one SECOND that he won’t turn me in!” The question is, what did Carly tell him, and who was she telling him about? General Hospital viewers will have to “tune in tomorrow” to find out!

At Turning Woods Memory Care facility, Stella Henry (Vernee Watson) catches up with her favorite Alzheimer’s patient, Mike Corbin (Max Gail). It sounds like he is tired of being cooped up and doesn’t think he belongs there any more, as he tells her, “They’re never gonna see me around this place again!” Or does he think he’s somewhere else from his past? He sounds like he’s talking about being in jail!