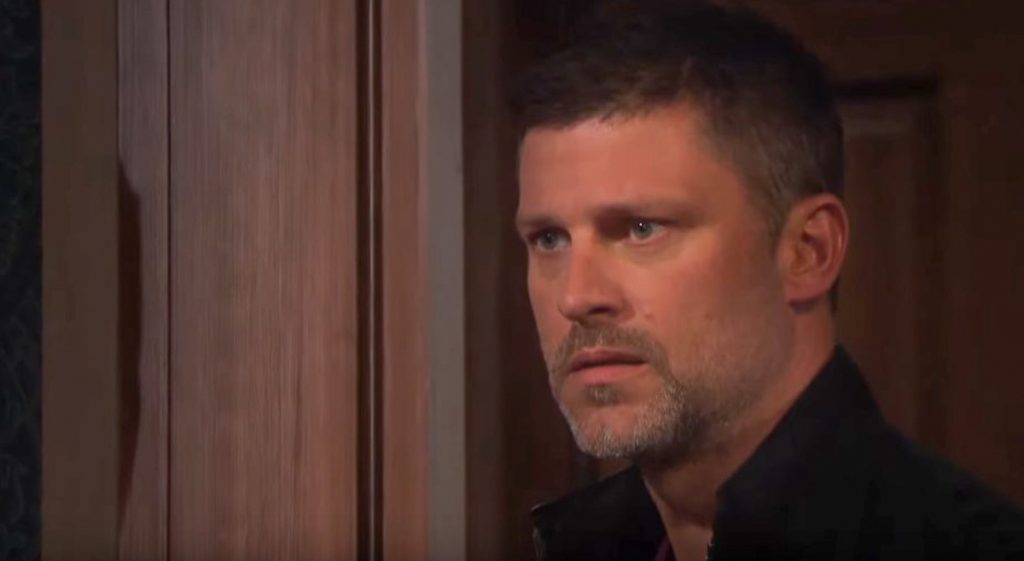 Eric Brady (Greg Vaughan) is stunned by Nicole Walker’s (Arianne Zucker) that Mickey Horton (the May twins) is his daughter! With little Mickey missing and possibly in danger, Nicole’s conscience just couldn’t let her keep this secret any longer.

She will likely confess that she agreed to keep the secret for Sarah, after finding out from Xander Kiriakis’ (Paul Telfer) copy of the paternity test that he had brought over, she had accepted, and then he had changed his mind about and wanted it back! As Days of Our Lives viewers will recall, it wound up in the fireplace as kindling and is long ago burned up.

Once again, Xander has a piece of paper he wishes he hadn’t given someone and tries to destroy his confession! He wrote out a confession under duress from Clyde Weston (James Read) only he doesn’t know Clyde is behind it just yet.

He had given the confession to the person he believes to be Police Commissioner Hope Brady (Kristian Alfonso) at the Salem Police Department in Friday’s episode. Of course, he doesn’t know she is really Princess Gina (Kristian Alfonso) either, and she had not opened the confession as of Friday’s episode. It was in an envelope that he handed her. He will probably hang around a few minutes and then see it laying on a desk and try to grab it and tear it up.

Meanwhile, Ciara Brady (Victoria Konefal) is doing exactly what Ben Weston (Robert Scott Wilson) told her not to do and took matters into her own hands. She tracked down Clyde’s goon, Ray (uncredited character) and he told her initially he didn’t know Clyde or anything about a baby, until Mickey started crying! She pretended to be a nanny Clyde had sent and attempted to drink Ray under the table with whiskey shots, and then she started to bolt with Mickey to find out Ray was faking and wanted to know where she thought she was going and what she was doing! She will take him on, possibly in a physical fight, willing to do anything to get baby Mickey to safety! Ben probably worries about her too much – after all, she has Bo Brady (Peter Reckell) genes!

Chad DiMera (Billy Flynn) heads to a room at the Salem Inn, where his father – or his father’s doppelganger – Stefano DiMera (last played by Joseph Mascolo) agreed to meet him after Chad beat him in a cyber chess game. Princess Gina had previously warned “Steffy” not to go anywhere outside their lair, but in Friday’s episode he had obviously left. Perhaps Gina saw “Steffy” out and about and intercepted him before he could go to the hotel room!