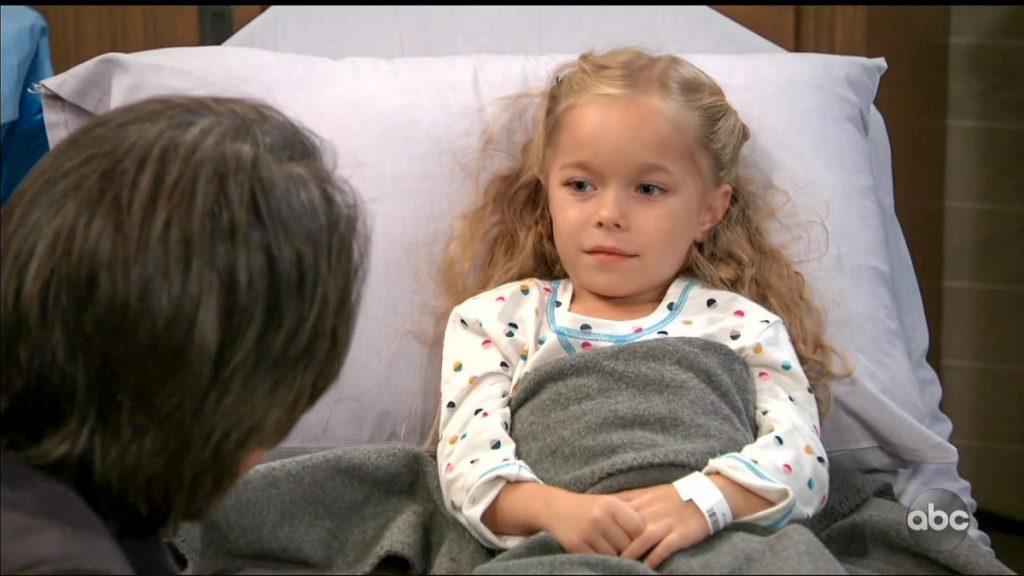 It looks like Dr. Hamilton Finn (Michael Easton), Hayden Barnes (Rebecca Budig), and Violet Finn (Jophielle Love) are at the Baldwin house so Violet can get better acquainted with her father. She may not have been told just yet that he is her father, but she tells her mother that she’s glad Finn is their friend! That may be the prelude to Violet learning he’s her daddy, however.

Lucas Jones (Ryan Carnes) is still at the cemetery after his ghostly encounter with his late adoptive father, Dr. Tony Jones (Brad Maule) when his birth father, Julian Jerome (William DeVry) shows up. It is definitely not a good day for Julian, as Lucas confronts him about the story that his now estranged husband, Brad Cooper (Parry Shen) told him about his blackmailing him and trying to break the two of them up. Julian will admit to it, and that will be the straw that breaks the camel’s back! Lucas tells him good riddance, to get out of his life and never come back!

Then, at Kelly’s, Brad Cooper (Parry Shen) is panicked again, this time because Liesl Obrecht (Kathleen Gati) comes to call! She wants to know exactly how he is covering his tracks! She is probably concerned about the DNA tests that he doctored at her request to show a mother-daughter relationship between Nina Reeves (Cynthia Watros) and Sasha Gilmore (Sofia Mattsson) not being traced back to her somehow!

At Jasper “Jax” Jacks’ (Ingo Rademacher) house, he is very upset with Nikolas Cassadine (Marcus Coloma)! Jax has had to lie to more and more people about more and more things just to keep Nikolas’ survival a secret, but he’s fed up and on the verge of exposing Nikolas himself! Jax is visibly frustrated and angry at Nikolas when he tells him he didn’t sign up for this, meaning lying to even his daughter and his ex-wife just to keep Nikolas’ survival a secret!

It looks like Laura Collins, (Genie Francis) Valentin Cassadine (James Patrick Stuart) and Nina Reeves may all be at the Port Charles Police or possibly in Laura’s mayoral office discussing something that needs to be found. The clips in the preview may be edited slightly out of order as she says to a panicked looking Valentin and Nina “Maybe you can help us find – “ ! Charlotte Cassadine (Scarlett Fernandez) was kidnapped by Cassandra Pierce (Jessica Tuck) from Kelly’s in Friday’s episode! Or, perhaps Cassandra has made a ransom demand or other type of threat to either Laura or Valentin and Nina so they are at the police station for that reason!

Still at Kelly’s, Lulu Spencer (Emme Rylan) panics as she finishes her mother Laura’s sentence, with “CHARLOTTE”! She asks Maxie Jones (Kirsten Storms) “Charlotte! Where did she go?” Cassandra managed to snatch her as Lulu, Maxie, Brad, and Willow Tait (Katelyn MacMullen) were all distracted with their own conversations at Kelly’s on Friday!

Cassandra has hidden Charlotte somewhere, possibly in a vacant house, and she warns her that nobody is going to find them! Charlotte looks scared and Cassandra looks serious! Hopefully someone will find her soon or Charlotte is feisty enough to get away on her own and find her way to safety! Cassandra is truly a monster to kidnap a little girl to use as leverage; what will Nikolas think of that when he finds out she kidnapped his young niece/cousin (Nik and Charlotte are cousins on his Cassadine side but uncle and niece through Lulu)?!

At the PCPD, Commissioner Jordan Ashford (Briana Nicole Henry) has a warning for Jason Morgan (Steve Burton); she tells him for Sam McCall’s (Kelly Monaco) sake, not to fight her on something! Perhaps it will have something to do with Sam’s upcoming bench trial.