General Hosptial (GH) spoilers tease that Franco Baldwin (Roger Howarth), still believes that he is Drew Cain (Billy Miller) thanks to the memory mapping procedure that was forced upon Franco in order to save Cameron Webber (William Upton). Drew and Franco have been connected since childhood, but this version of Drew wasn’t aware of just how far Franco went to save him.

Drew and Franco were raised together by a woman named Betsy Frank (Deborah Strang) when they were both very young. But Betsy had a boyfriend named Jim Harvey (Greg Evigan) who took an unhealthy liking to Franco, and sexually abused him on a regular basis. But when Jim started to turn his attention to young Drew, Franco tried to hide Drew in the basement, but Drew fell down the stairs. Fearing the Franco had been planning to harm Drew, she gave Drew away. 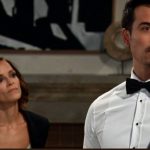 Drew had no idea the lengths Franco had gone to protect him until Scott Baldwin (Kin Shriner) told him about it. Scott hoped that Drew would realize that he owes Franco and would agree to have to procedure to have the memory mapping procedure reversed. Franco had planned to leave town with Kim Nero (Tamara Braun) but this information will likely convince Drew that Franco deserved his life back.

Kim has made it clear that she is leaving Port Charles because she needs help dealing with the death of her son, Oscar Nero Quartermaine (Garren Stitt). She will go with or without Franco, and it looks like she will have to go without him, as Franco will decide to stay. Look for a tearful goodbye between the two before Kim leaves.

Will Franco elect to stay and have the procedure reversed? Will Kim leave town alone? Some exciting scenes are coming up on General Hosptial, airing weekdays on ABC! And don’t forget to check back here regularly for all your General Hospital news, information and spoilers!