General Hospital spoilers for Monday, August 19 tease of another exciting day of drama and suspense for General Hospital viewers as various Port Charles residents interact and some confront others!

At Charlie’s Pub, Julian Jerome (William DeVry) stands with his ex-wife Alexis Davis (Nancy Lee Grahn) and their daughter Samantha McCall (Kelly Monaco). As General Hospital viewers know, Julian has plans to sell Charlie’s Pub and move to Manhattan with his girlfriend, Dr. Kim Nero (Tamara Braun). Julian will want to make amends and try to reconcile with his daughter Sam before leaving town. He tells her that he wants to say a proper goodbye.

In a jail cell, Shiloh Archer (Coby Ryan McLaughlin) holds a phone he got from a guard. He is trying to make a deal with someone he has called – or is he trying to double deal again? He tells the person on the other end that he has some information he thinks they would find very interesting.

At the Baldwin house, Elizabeth Baldwin (Rebecca Herbst) asks her sister Hayden Barnes (Rebecca Budig), who showed up ready to move in, if she knows what she’s doing. Hayden had been advised by her ex-fiance Dr. Hamilton Finn (Michael Easton) about what happened with Franco Baldwin (Roger Howarth). He also mentioned her sister might need a little extra loving care and assistance. Hayden definitely came ready to help including as a live-in babysitter for the younger ones if necessary. 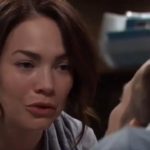 General Hospital viewers will recall that Franco, who now identifies as pre-2012 Drew Cain (Billy Miller) got a little too aggressive with the wrong person. Now he’s in a jail cell at the Port Charles Police Department. This was after he slugged Detective Harrison Chase (Josh Swickard) at the Floating Rib.

Franco’s father Scott Baldwin (Kin Shriner) must have been called by either Drew or Jason Morgan (Steve Burton) about the situation. Obviously, Franco himself wouldn’t know anything about Scotty. Drew is already there. Scotty bursts into the police department and demands to see his son!

In his jail cell, Franco talks to Jason who is visiting him there. He wants to know how something like “this” happens. Perhaps Jason has been able to get through to him as to who he really is. Maybe he tells him he has been implanted with Drew’s pre-2012 memories. So maybe what he’s asking about and calling it “this.” Jason and Drew (through Franco) may actually be bonding as brothers. But General Hospital viewers doubt this is how Drew’s late son, Oscar Nero Quartermaine (Garren Lake Stitt) wanted it to happen!

At the Corinthos home, Robert Scorpio (Tristan Rogers) talks to Sonny Corinthos (Maurice Benard) about his son Dante Falconeri (Dominic Zamprogna). Robert tries to reassure Sonny, in his own rather gruff way, that he didn’t “break” Dante.

General Hospital Spoilers: Lulu Makes Her Decision – Is She Moving On From Dante? https://t.co/0IX8fsq3Qq pic.twitter.com/OAoewZHFk9