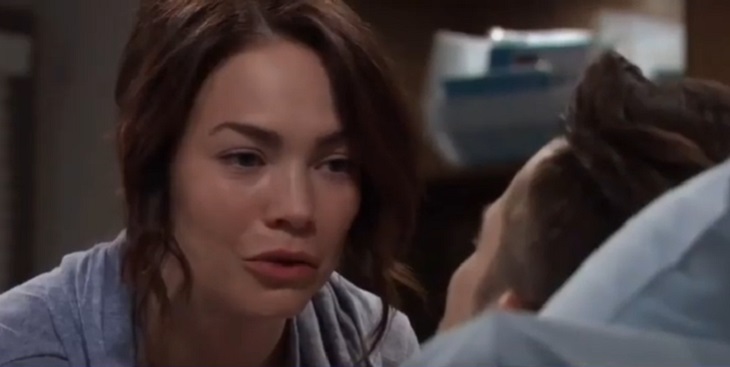 General Hospital spoilers tease that Franco Baldwin (Roger Howarth) thinking he is pre-2012 Drew Cain (Billy Miller) will seek Kim Nero (Tamara Braun) out for a night of romance, and his wife Elizabeth Baldwin (Rebecca Herbst) will be devastated!

General Hospital Spoilers – Kim May Not Give In, At Least Not Right Away

It is important for General Hospital viewers to remember that Kim may not give in – at least not right away. After all, this is not really Drew pre-2012, he’s her friend Elizabeth’s husband, with Drew’s pre-2012 memories implanted in his brain.

As long as post-2012 Drew is still around, Kim will be able to keep her heart straight. But after real Drew is gone from the General Hospital canvas it may be a whole other ball game! Depending on how his exit is written, she may cling to Drew’s memories in Franco in every way possible including physically, trying to recreate both Drew and their late son Oscar Nero Quartermaine (Garren Lake Stitt)!

Of course, Elizabeth realizes that it is the memory implantation that is causing this, and Kim knows it consciously as well; but since Oscar died, Kim has been very fragile. If she and Julian Jerome (William DeVry) decide not to move out of Port Charles right away, Kim may be very vulnerable to Frankendrew with Drew’s memories. The only problem is that he won’t know anything about Oscar.

Only the real Drew will be a comfort to Kim in that aspect. Elizabeth knows all this but it is still going to be very difficult to see her husband pursue Kim. Frankendrew will continue to tell Elizabeth that he’s Drew and that he is not her husband and that he does not know her, and she will see all this coming out of Franco’s mouth and face, and it’s going to feel like rejection!

General Hospital Spoilers – What About The Kids?

It is questionable, however that Dr. Arthur Cabot (Time Winters) would have gone through with the transfer since at the point Franco arrived, he and Shiloh were arguing over it and Cabot didn’t want to use a teenager. But how is Elizabeth going to explain this to the two younger boys, Jake Webber (Hudson West) and especially Aiden Webber (Jason David), the youngest? Perhaps grandma Laura Collins (Genie Francis) and her psychiatrist husband Dr. Kevin Collins (Jon Lindstrom) will decide to give an assist. Kevin has already contacted a memory specialist he knows to bring in on the case, but it would probably be best for Dr. Andre Maddox (Anthony Montgomery) to be brought in as well!

General Hospital Spoilers – What Happened To Franco’s Own Memories?

General Hospital viewers want to know what happened to Franco’s own memories? Granted, some of them he would rather forget but with memories, unfortunately you have to take the good with the bad. Are they just covered over with Drew’s memories, as happened to Drew with Jason’s memories, or were they replaced? That would probably be something that Dr. Maddox along with a neurologist could determine. But before anyone uncovers Franco’s memories and tries to recover them, if it is possible, Drew’s memories need to be told to make sure Shiloh never hurts anyone again!