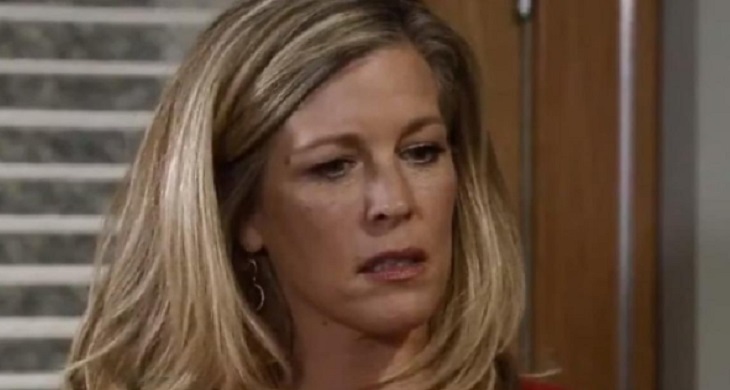 Oh no! This was definitely not part of the summer plan. General Hospital star Laura Wright (Carly Corinthos) will be wobbling on just one foot for the next six weeks as the actress broke her other foot! The blonde beauty was supposed to travel to Prague to visit with her daughter this summer but unfortunately had to cancel her plans at the last minute because of her injury. Here’s what you need to know.

Laura took to her social media accounts to let everyone know that she will have to be taking it easy for the rest of the summer as she broke her foot. Apparently, she fell down the stairs about a week ago and is now forced to wear a cast. She posted a photo from her doctor’s office right before she was supposed to fly to Europe. She wrote, “Ok DeltaI have to cancel my flight to Prague with my daughter because of my broken foot here’s hoping you guys help me out—— you guys are my favorite airline!! Don’t let me down.”

The daytime television star also posted another photo of her and her boyfriend Wes Ramsey (Peter August) scooting around! Talk about a great, supportive boyfriend, right? She captioned the adorable post with, “Yep I fell down the stairs over a week ago and broke my foot…. can’t walk for 6 weeks I get to wear this sexy black cast for 4 and @wes_ramsey is a saint!!!! Thank you baby for taking care of me !!!!!! #cantkeepmedown#wecandohardthings #scooterfun#stillsmiling oh and I love my @kneerover”

Yep I fell down the stairs over a week ago and broke my foot…. can’t walk for 6 weeks😫 I get to wear this sexy black cast for 4 and @wes_ramsey is a saint!!!! Thank you baby for taking care of me !!!!!! #cantkeepmedown #wecandohardthings #scooterfun #stillsmiling oh and I love my @kneerover

Now, whether or not this will impact Laura’s filming schedule on General Hospital remains to be seen. So far producers have made no comments about her injury and if they plan on hiding it in front of the cameras. With her character Carly Corinthos heavily pregnant we have a feeling that she won’t be moving around too much as it is! In the meantime, we wish Laura a speedy recovery so she can get back on her two feet quickly!