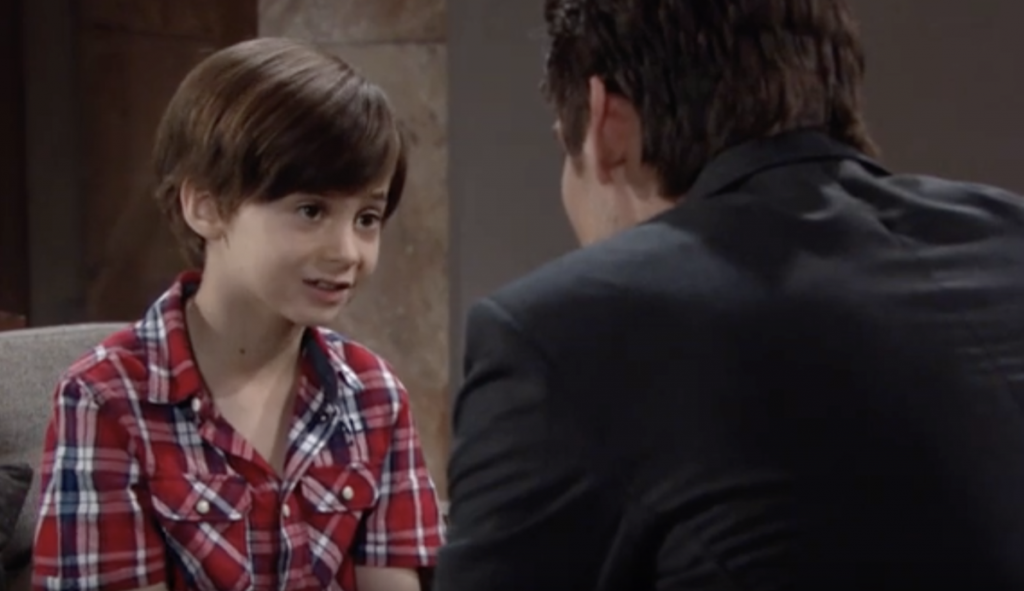 The Young and the Restless spoilers for Monday, August 12, tease that Phyllis Summers (Michelle Stafford) will meet with Abby Newman (Melissa Ordway) at Society. They’ll be discussing Abby’s design for the Grand Phoenix Hotel when Theo Vanderway (Tyler Johnson) shows up. He’ll mention last night’s incident, which Phyllis will then hear about and how it involved Summer Newman (Hunter King).

Phyllis will remark that she doesn’t want a catfight at the hotel opening, and she’ll lecture Abby a bit. After Theo leaves, Abby and Phyllis will bicker, with Phyllis ultimately remarking about Abby’s lack of respect. Abby will then tell Phyllis that the majority of Genoa City doesn’t respect her, and Phyllis will leave.

Next, on Y&R, Chelsea Lawson (Melissa Claire Egan) will watch as Adam Newman (Mark Grossman) and Connor Newman (Judah Mackey) interact. While Connor is out of the room, Adam will thank Chelsea for bringing Connor and for raising such an amazing kid. Adam will stun Chelsea by asking her to allow Connor to live with him.

Chelsea and Adam will then argue, with Chelsea pointing out that he could blow up Connor’s life – after all, he used Christian Newman (Alex Wilson) to hurt Nick Newman (Joshua Morrow). Adam will remark that he doesn’t want to have to go to court, and Chelsea will reply that she’d fight him and win.

Later, Adam will encounter Devon Hamilton (Bryton James) in the corridor and Devon will mention all of the havoc he’s created in town. Adam will then proceed to offer him the Grand Phoenix Hotel for purchase. Devon will wonder why he’s not selling the hotel to Phyllis, but Adam will say it’s too risky, and the place is Devon’s if he wants it.

Next, on Y&R, Victor Newman (Eric Braeden) will be at Newman Enterprises when he becomes weak from his illness and has to rest. Nick will arrive, and they’ll discuss Nick’s giving Victoria Newman (Amelia Heinle) the Dark Horse real estate back, as well as Victor’s treatment and Nick’s assault of Adam. Victor will tell Nick that he regrets bringing Adam back.

Later, Victor will be shown on the phone with someone, telling them angrily that his grandson’s future depends on it. Abby will then arrive, and they’ll discuss Nate Hastings (Sean Dominic) a bit, her altercation with Summer, and her partnership with Phyllis on the hotel.

Young And The Restless Comings And Goings: Connor And Christian Newman Have Been Recast https://t.co/OSqB6wUveF pic.twitter.com/RZrUp55gTZ

Y&R Spoilers – Connor Newman Wants To Live With His Dad

Next, on Y&R, Connor and Chelsea will argue at Nick’s place, as Connor lobbies for the two of them to live with Adam. Connor will be upset that she’s trying to keep him apart from his dad, and he’ll angrily leave the room as Nick arrives. She and Nick will discuss what happened at Adam’s penthouse, and Chelsea will worry about how to handle this situation with Connor and Adam.

Nick will wonder if Chelsea’s planning on taking Connor and leaving, but Chelsea will say that she won’t run because (a) Connor would never forgive her, and (b) Adam would just find them. She’ll say that she hopes Adam’s love for Connor is stronger than his anger toward the world.

Finally, on Monday’s new episode of Y&R, Phyllis and Theo will be talking at Dark Horse, with Phyllis remarking that his people skills could use some work. As Theo leaves, Adam will arrive and share that he’s reunited with Connor. Phyllis will say that she needs more time to get the money to buy the Grand Phoenix, and Adam will say that he’s offered the place to Devon

Adam will then tell Phyllis to pack up because Dark Horse is dead. Phyllis will taunt him for having nothing now, but Adam will say that he intends to be on top of the world with both of his sons.