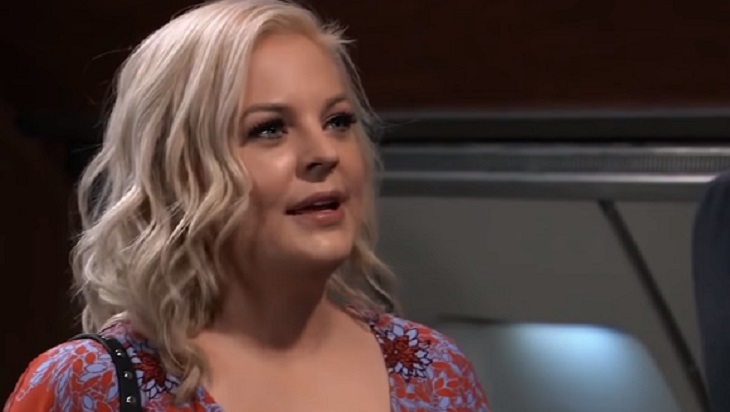 General Hospital spoilers tease that Maxie Jones (Kirsten Storms) will remain intent on confronting Dante Falconeri (Dominic Zamprogna) about leaving his wife Lulu Falconeri (Emme Rylan) and their children high and dry when she needs him the most!

General Hospital viewers will recall from Tuesday’s episode, that Maxie was rather shocked to get word from her father, Frisco Jones (Jack Wagner) that he had approved a visit to Dante in the WSB facility in Ithaca, New York.

However, when she first overheard Robert Scorpio’s (Tristan Rogers) conversation about Dante being in the Ithaca location, she didn’t hear the last part – that he was being moved! Will Dante still be there, or has Frisco sent his daughter on a wild goose chase?

Frisco never was a very good father to Maxie and her late sister Georgie Jones (Lindze Letherman) and wife to Felicia Scorpio (Kristina Wagner)! He didn’t even show up for Nathan West’s (Ryan Paevey) funeral!

However, she is intent on confronting Dante and other General Hospital spoilers tease that he is still in the Ithaca facility when Maxie and Peter August (Wes Ramsey) arrive. By the time she actually is able to talk to Dante, however, he may be less than receptive to her visit, and he certainly may not be the understanding Dante that she, and his family once knew.

By using confrontation, she could actually trigger him into a combative mode, as he was the time he saw a knife laying out on a bar at a restaurant and started trying to defend himself against an unseen enemy because of a Post-Traumatic Stress Disorder flashback! Or he could have a relapse into having been brainwashed to kill Lulu and even think Maxie is Lulu if it’s bad enough!

Did Frisco think to ask Dante’s doctors if he was up for a visit or did he just go over the doctors’ heads? Either way, her confrontation with Dante may bring unwanted and unexpected results which could cause repercussions with Lulu; if Maxie only makes things worse then Dante may never come back home!