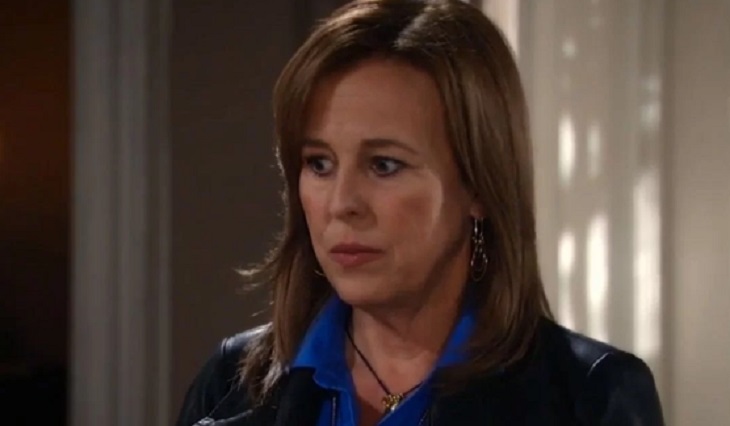 General Hospital spoilers tease that Laura Webber (Genie Francis) will experience a Déjà Vu surprise this week on General Hospital! Longtime General Hospital viewers will recall that back when Laura was married to Scotty Baldwin (Kin Shriner) and the Spencer siblings first hit town, Bobbie Spencer (Jacklyn Zeman) wanted to get with Scotty and conspired with her brother Luke Spencer (Anthony Geary) to break the couple up!

Of course, Laura ultimately fell for Luke, and went on the run with him from Frank Smith (George Gaynes) and his goons, while Bobbie stayed behind trying to win Scotty’s heart, although when Laura and Luke got married later, Scotty caught the bouquet and ran after their bridal carriage hollering that he’d changed his mind about the divorce – of course, way too late!

General Hospital Spoilers: Who Pushed Obecht Overboard And Tried To Kill Her?

A new General Hospital promo video shows Laura at the wedding celebration on the Haunted Star with her current husband Dr. Kevin Collins (Jon Lindstrom). Kevin was a little hesitant to come to the festivities, since he is still a little sensitive about people being reminded of his twin brother Ryan Chamberlain (Jon Lindstrom), and Laura tells him Cameron Webber (William Lipton), who wasn’t going to come at first either, showed up with a date and looked happy, and she chatters on to him about their situation and that if Franco and Elizabeth Baldwin (Roger Howarth, Rebecca Herbst) hadn’t wanted Kevin there, they wouldn’t have invited him.

As they continue talking near the Haunted Star’s bar, Kevin tells Laura he’s still not sure he’s ready to enter he and Laura’s socializing scene fully just yet. Laura tells him okay, then how about if they stay for just one more toast to the happy couple and then they leave?

Kevin agrees and says good. But then Laura tells Kevin to look around, as she’s realized nobody’s paying any attention to their being there, or even noticing them anyway, and he agrees to that as well and tells her it’s probably because people don’t know what to make of “that!” Laura turns her head to see Scotty and Bobbie coming in together, obviously as one another’s date! It is a little obvious that Scotty wants to be with Bobbie really badly since he has a foot injury and comes in with one foot on a scooter!

Days of Our Lives Spoilers: Ben Weston Gets Good News!