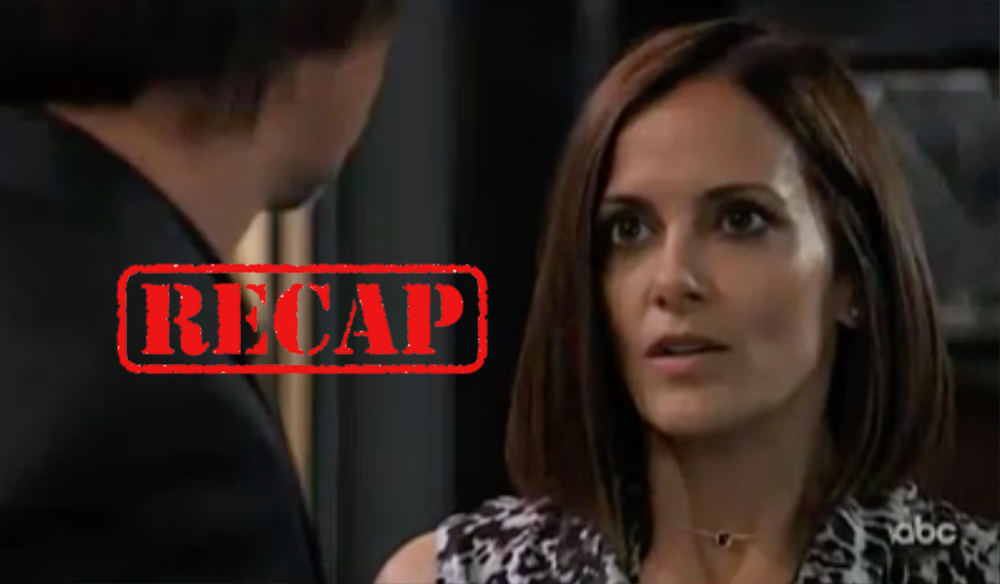 Welcome to your Tuesday, July 9th General Hospital (GH) recap! We begin our day on the Haunted Star, where the psychic (Veronica Cartwright) senses that Kiki Jerome is with them. She says “Kiki’s here” as the lights go out.

We see a drunk Liesl Obrecht (Kathleen Gati) walk out on the ship’s deck and is shoved off by a mysterious figure.

Kim Nero (Tama Braun) and Drew Cain (Billy Miller) find the fuse box and turn on the lights. Suddenly Kim injects Drew with a needle and he collapses unconscious.

In the main reception hall of the Haunted Star, Hayden Barnes (Rebecca Budig) makes her surprise grand entrance. Elizabeth Webber (Rebecca Herbst) embraces her and is happy she made it to the reception, as Hamilton Finn (Michael Easton) looks on. Curtis Ashford (Donnell Turner) embraces Hayden and asks if they can take a walk to catch up. She says in a minute because she needs to see someone, she goes over to Jasper Jax (Ingo Rademacher) and kisses him on the lips.

Elizabeth and Curtis question how long she is going to be in town. She explains that she is seeing Jax after they worked together in Rome. Elizabeth talks to Finn out on the deck and asks how he feels about Hayden, which he does not answer.

Kim Nero (Tamara Braun) drags Drew Cain (Billy Miller) to one of the staterooms. He awakes and thinks he may have had too much to drink. Kim lays with Drew on the bed and talks about the baby they are going to have together. Kim has undressed Drew and gets undressed herself, she has lost her mind

Julian Jerome (William DeVry) busts in the room and catches them. Kim explains that she wants to replace Oscar and Julian explains he did not realize how sick she is. Drew wakes up in the bed on the ship, totally confused.

Cameron Webber (William Lipton), Trina Robinson (Sydney Mikayla), and Josslyn Jax (Eden McCoy) walk out on the ship deck discussing Hayden’s return. They hear Liesl screaming in the water for help. Cameron and the others run in saying man overboard!

Jax and Nina resuscitate Liesl who has been pulled from the water. As they bring Liesl inside, Nina questions where Valentin Cassadine (James Patrick Stuart) has been. Epiphany brings paramedics to check on her and Liesl says she didn’t fall, she was pushed. Nina asks who pushed her and she says she does not know.

General Hospital Spoilers Ava Jerome has her psychic on the Boat

Ava Jerome (Maura West) asks the psychic if the lights turning off was a sign from Kiki. Ava calls out to Kiki and asks to talk to her. She starts to apologize out loud for all the things she did to her. The psychic says Kiki is gone and Ava refuses to believe her.

General Hospital Spoilers: Cameron Has Some Competition – Will He Lose Josslyn To Dev? https://t.co/tr5qZRPsyE pic.twitter.com/GnSMzqIcTU

The psychic suddenly says there was a special dinner they were going to go to. Ava confirms they had a dinner date that was supposed to happen.

At the Metro Court, Lulu Falconeri (Emme Rylan) sees Peter August (Wes Ramsey) and Maxie Jones (Kirsten Storms). They ask if she’s still up to no good with the robbery story? Her handsome date appears and she walks away to greet him.

Lulu sits with her date and explains what she was working on. She thinks he’s too nice and good looking to be on the dating apps, the two of them flirt a bit.

Peter looks at Maxie and asks how she proposes they find Dante? Maxie says it could be easy to break into the facility where Dante is and Peter disagrees. Maxie says Spinelli can get them fake IDs to break in.

Franco and Liz discuss the rambling Liesl did about switched babies and Bobbie overhears. She runs over to talk to Brad about what she overheard regarding Wiley.

Curtis finds a shirtless and confused Drew and asks what happened. He finds a needle and Drew recalls that Kim drugged him.

Nina thanks Franco for the invite to the party and says how happy she is for him. Ava begs the psychic to bring Kiki back again and she says there one last thing they can do. Bobbie and Scottie say goodnight to Liz and Franco, as the two of them dance and kiss…flash to preview