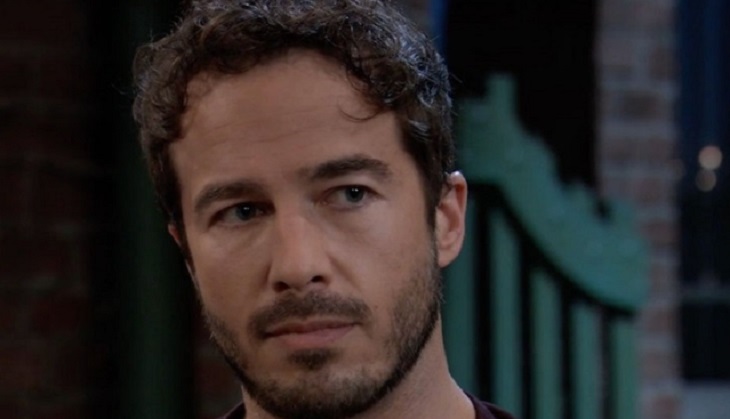 General Hospital spoilers tease that Sam McCall (Kelly Monaco) will console a shaken Lucas Jones (Ryan Carnes) in Friday, July 12th’s episode of General Hospital!  Is she the answer to his problems, can she help him save Wiley from Shiloh?

It’s likely that the DNA test that Shiloh Archer (Coby Ryan McLaughlin) has had his family court attorney, Zahra Amir (Maysoon Zayid) submit to compare his DNA to that from the burp cloth with Wiley Cooper-Jones’ (Eric and Theodore Olson) DNA has come back and of course it’s going to show that Shiloh’s DNA doesn’t match.  Whether another will be done with Willow’s DNA is a question, but it’s entirely possible that it might be in order to establish both maternity and paternity of the baby.

Of course that would shake up Lucas! He won’t know if his husband Brad Cooper (Parry Shen) somehow altered the test outcomes, as he has done in the past, or if they have the wrong baby!

On the other hand the DNA test most likely was not done at General Hospital, Shiloh would have realized that Brad could alter the results were it done there, knowing he works in the lab! However, there are two other possible scenarios that could shake Lucas up really badly; and that is if Brad has run off with the baby or if he’s been arrested for pushing Liesl Obrecht (Kathleen Gati) off of the Haunted Star!

This could also be related to the scene in the new General Hospital weekly promo, “Hayden’s Back” where Lucas is shown pinning Shiloh to the wall at GH. Perhaps Brad has gone missing with the baby and Lucas thinks that Shiloh either kidnapped them or has had one of his “Dawnie” minions to do so.  If this is how this spoiler plays out Shiloh is bypassing the legal system and his attorney will probably bail on him!

Zahra won’t put up with any monkey business or worse that could cause her to lose the custody case, and she’s taken Shiloh to task several times already for needing to prove himself a competent father who could provide a stable, loving home for a baby!

Young and the Restless Spoilers: Sparks Fly Between Jack And Celeste -New GC Couple In The Works?