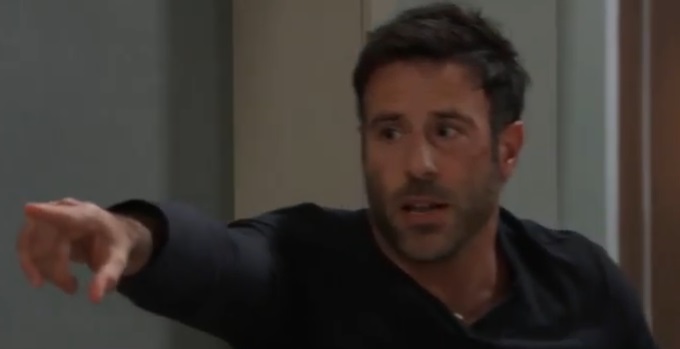 First, Sonny Corinthos (Maurice Benard) is talking with his combination young friend and fake cousin Dev Cerci (Ashton Arbab) and has some questions for him. Apparently Dev is telling Sonny his reasons for coming to Port Charles, aside from what he already said about running from Raj Patel’s (Noshir Dalal) men and wanting a safe haven and protection from them. Sonny asks Dev, “Is that what you had in mind when you came here?”

Next, Peter August (Wes Ramsey) and Maxie Jones (Kirsten Storms) look like they may have arrived in the WSB facility in Ithaca, New York where Maxie’s father, WSB head Frisco Jones (Jack Wagner) arranged a visit for them with Dante Falconeri (Dominic Zamprogna). Since Peter grew up in a heavily DVX atmosphere as the son of Cesar Faison (Anders Hove), it’s understandable why he might tell Maxie that it’s not every day that he walks into the enemy’s lair!

At the Port Charles Police Station, Detective Harrison Chase (Josh Swickard) talks to his brother, Dr. Hamilton Finn (Michael Easton) who apparently tagged along when Hayden Barnes (Rebecca Budig) was brought in for questioning after Liesl Obrecht (Kathleen Gati) suspected her of pushing her off the Haunted Star at Franco and Elizabeth Baldwin’s (Roger Howarth, Rebecca Herbst) wedding celebration and reception party. Hayden had arrived shortly after Liesl went overboard. Chase notes his brother seems to know Hayden pretty well, and wants to know who she is to him!

Elsewhere, Nina Reeves (Cynthia Watros) also has some questions about Hayden. She looks Jasper Jacks (Ingo Rademacher) in the eye and asks him what the deal is between him and Hayden! Meanwhile, back at the Port Charles Police Station, Hayden is likely in the interrogation room as she asks someone if she’s under arrest!

Willow Tait (Katelyn MacMullen), still in jail, tells Michael Corinthos (Chad Duell) that she has some great news! She must be telling him about her mother’s and her conversation in Thursday’s GH episode. She now has shed the name “Harmony” and is going by her real name of Lorraine Miller (Inga Cadranel) and finally seeing the truth about Shiloh Archer (Coby Ryan McLaughlin) and the Dawn of Day.

Meanwhile, Shiloh is ballistic and wants someone arrested; the GH weekly spoiler showed Lucas Jones (Ryan Carnes) losing it and pinning Shiloh against the wall at the hospital; could this be who Shiloh is referring to?

Bold And The Beautiful Spoilers Friday, July 12: Sally Gets Time Alone With Wyatt – Thomas Plays A Trick On Hope