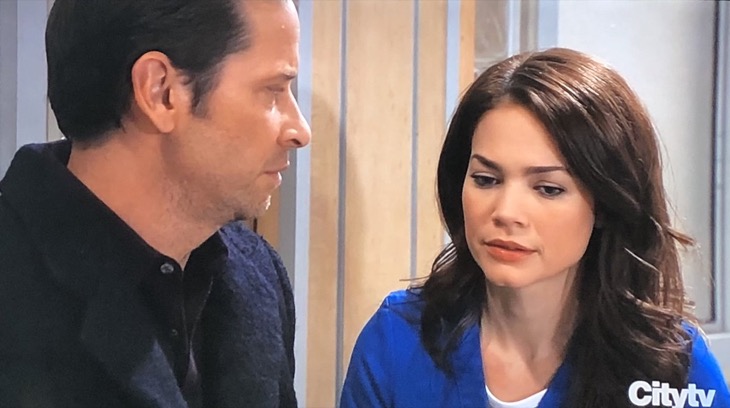 General Hospital spoilers tease that Elizabeth Webber (Rebecca Herbst) will lean heavily on Franco Baldwin’s (Roger Howarth) father, Scott Baldwin (Kin Shriner) when Franco becomes a serious person of interest in the serial killer attack! Scott, of course, will want to support his son’s significant other and do all he can to exonerate Franco.

While Scott should recuse himself due to conflict of interest, he may represent his son in court; although it is possible Diane Miller (Carolyn Hennesy) may step in. Scott will definitely want to be in the inner circle of Franco’s defense, however. That is, if the case DOES come to court; if Franco indeed is arrested for the murders of Kiki Jerome (Hayley Erin), Peyton Mills (John Patrick Jordan), Mary Pat Ingles (Patricia Bethune) and the attack on Lulu Falconeri (Emme Rylan) he may never come to trial, but he definitely could be held for an extended period of time in the jail of the Port Charles Police Department!

Other General Hospital spoilers tease that Ryan Chamberlain (Jon Lindstrom) will only frame him for two murders and the attack, and police may not have enough to charge him with Mills’ murder, especially since they let him walk after checking his cell phone and seeing Franco never returned his calls.

I will be booking the 14th off work.

It may not be how I’d have written it but my faves are getting married and I’ll be damned it I don’t celebrate that. 🥰#Friz #FrizWedding #GH 👰🏻🤵🏻 pic.twitter.com/28kRzrCaNH

Scott, and Diane, if she’s available to step up for Franco, may have a very challenging case; Franco will have poured his heart out in therapy with “Kevin” and likely will have told him about his continual battle against the inner darkness that he described to Elizabeth as “always knocking at his door.” General Hospital viewers know Ryan will have put in the file notes all the incriminating information Franco unwittingly provides him, in addition to hypnotizing Lulu to identify her attacker as Franco!

Exciting drama lies ahead for General Hospital viewers as February sweeps begin! Stay tuned to GH and keep checking General Hospital spoilers frequently to see how all the mysteries play out!