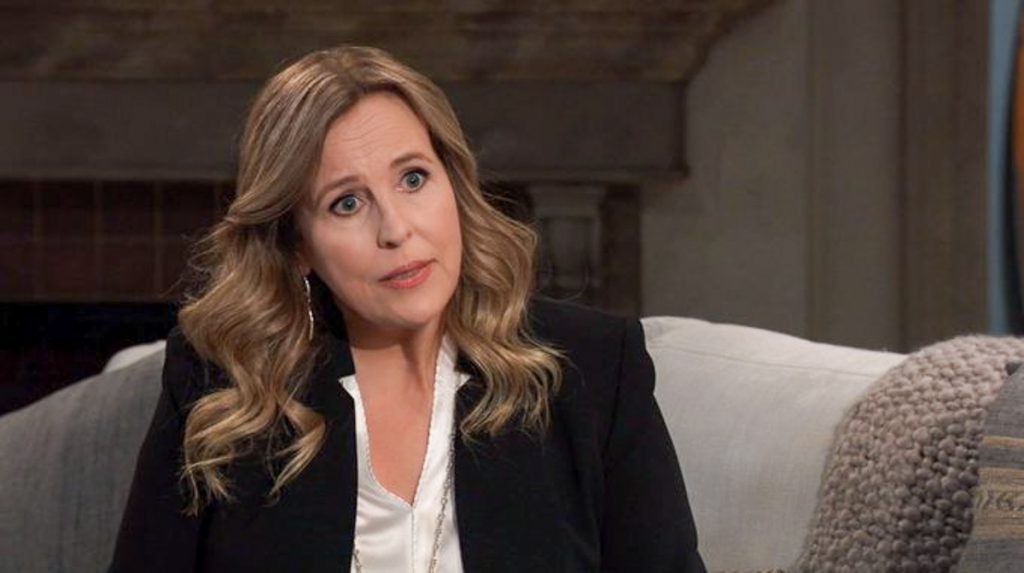 General Hospital Spoilers – Will Laura Collins Find Out The Connection Between Peter August And Drew Cain’s Abduction And Later Disappearance?

General Hospital viewers will recall that the whole problem came about for Peter August when Shiloh Archer (Coby Ryan McLaughlin) told him that he remembered and recognized him from when Drew Cain (pre-2012, Steve Burton, post-2012, Billy Miller) was abducted from Afghanistan in 2012 and that he remembered he had been Helena Cassadine’s (Constance Towers) right hand man!

Peter than had to do all kinds of unsavory things to keep himself and that part of his past from being exposed to his girlfriend Maxie Jones (Kirsten Storms) especially, and anyone else in Port Charles that could go back and possibly prosecute him for it. As long as Drew had been in town and didn’t care about getting his memories back, Peter was safe. But when his memories were put into Franco Baldwin (Roger Howarth) and the possibility of him remembering and as pre-2012 Drew, telling others, then he wasn’t so safe anymore. He’d never told anyone the whole truth, only as much as they needed to know at the time – which wasn’t much!

GH Spoilers – Peter August, Out Of Fear, Arranged For Drew Cain To Not Make It To Afghanistan

Peter, out of fear, contacted old associates and arranged for Drew Cain not to make it to Afghanistan but also intended for him to not make it to Ethiopia either, where his intentions were to get Dr. Andre Maddox (Anthony Montgomery) on a plane to Port Charles.

Drew’s plane went down in the Gulf of Aden, but not before he managed to get Andre to Port Charles, where Peter hired a goon, Bryce Henderson (Brian Gross) to try to kill Andre – but he escaped! As far as anyone knows, Drew was not so lucky; although no remains have ever been found, he was presumed dead and since declared dead by the Navy. Mayor Laura Collins certainly wasn’t happy over the loss of Drew, but the question is, why will she want to sabotage Peter?

Laura Collins is looking for the portrait of Helena Cassadine that once hung in Wyndemere, and that Valentin Cassadine (James Patrick Stuart) had thrown away, not knowing that it contained important clues to something hidden on Spoon Island. The something is a codicil to Mikkos Cassadine’s (John Colicos) will, that disinherits Valentin and would return the Cassadine fortune and Wyndemere and Spoon Island to her grandson Spencer Cassadine (Nicolas Bechtel).

Laura carries a deep hatred for Valentin, because of his murder of her son Nikolas Cassadine (Marcus Coloma) who she still doesn’t know is alive and also looking for the codicil! She doesn’t know it is a codicil that the painting contains but she deduced it is an important document.

GH Spoilers – In The Process Of Searching For The Portrait, She May Come Across Information Regarding Peter August’s Past

It is possible, with the intense search for the portrait and what important document it might contain that she, possibly with Jasper Jacks’ (Ingo Rademacher) help, come across more information of what kinds of evil Helena Cassadine was up to. Jax and Laura don’t currently know a lot about the relationship between Peter, Valentin, and Helena other than that Peter’s father was Cesar Faison (Anders Hove).

It is possible that while researching on her own what Helena may have hidden in the portrait that she finds out about the connection between Peter, Helena, and Drew’s past with each other and fear that he is not who he claims to be at all. She may even sabotage Peter’s plans with Maxie since she may fear that he would be a danger!

The Bold and the Beautiful Spoilers: Scott Clifton Talks Douglas Custody and How Liam Is Spread To Thin

The Young And The Restless Rumor: Phyllis Setting Up Stolen Jewelry Scenarios – Proves How Much They Need Her Or Setting Abby Up?