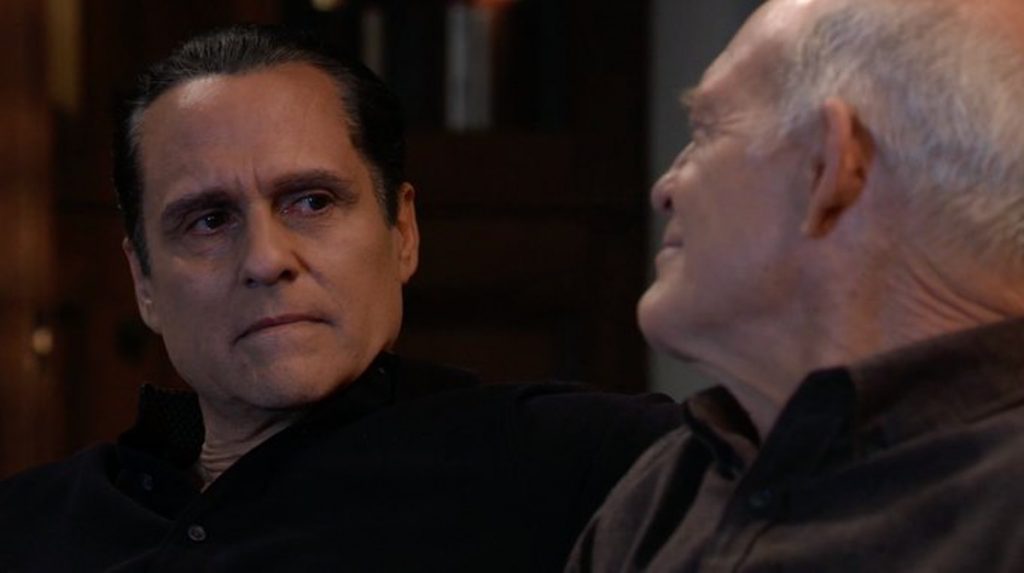 General Hospital (GH) spoilers tease that Sonny Corinthos (Maurice Bernard) has beat many foes over the course of his life and career. But there is one enemy that even Sonny can’t stop. Alzheimer’s disease has slowly his father, Mike Corbin (Max Gail) from a vibrant, colorful man into someone who doesn’t even know who Sonny is most days.

The Alzheimer’s has progressed slowly. At first Mike just seemed to be getting a little forgetful, bus as the days turned into weeks, Mike began to have days where he didn’t know family members were. And now, he’s having more bad days than good days. Sadly, it won’t be long before Mike is gone. Sonny has done his best to care for Mike during this time.

When the disease first started getting bad, Sonny was adamant that they could care for Mike at home. He hired a nurse and for awhile, things were well. But as Mike’s behavior grew increasingly erratic , a stubborn Sonny had to be convinced that Mike just needed more care than Sonny or his family could give him. And now Sonny will be with his own mortality when Mike eventually succumbs to his illness.

Mike and Sonny have not always had a very good relationship. Mike was a gambler and lost thousands of dollars and Sonny had to keep bailing him out. Mike left town for awhile but eventually returned at about the same time the Alzheimer’s started manifesting itself. Mike and Sonny have been able to form a stronger father and son relationship than they had ever had before. Losing Mike now will devastating to Sonny. He’s going to need the love and support of his wife, Carly Corinthos (Laura Wright) and the rest of his family to get through this tragedy. Spoilers haven’t indicated just when Mike will die, but it seems as if it coming sooner rather than later.

GH Spoilers – What will happen

Will Mike succumb to his ill ness before the end of the year. Or does his family have a little bit of time left? Some heartbreaking scenes are coming up, so stay tuned to General Hospital airing weekdays on ABC. And don’t forget to check back here regularly for all your General Hospital news, information and spoilers!