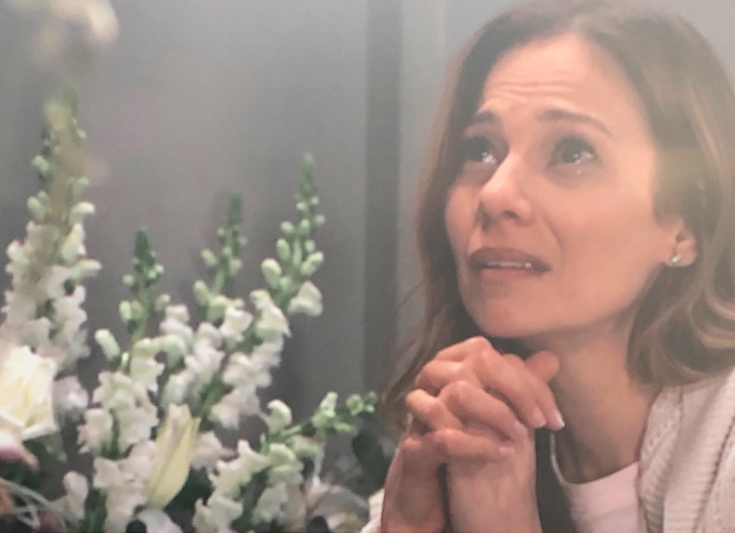 As General Hospital viewers know, Drew and Kim are in Tanzania, climbing Mount Kilimanjaro to scatter their late son Oscar Nero Quartermaine’s (Garren Lake Stitt) ashes at the summit as he had requested. Is it possible Kim may take a tumble and hurt herself, or will this be a more emotional caretaking that Drew will need to undertake?

Kim is in rough shape trying to handle her grief and loss over Oscar. For sixteen years, he was her whole world and her reason for living. Now that he’s gone, she may find no purpose for going on and other General Hospital spoilers tease that she will do something that will impact both Drew and her boyfriend back home in Port Charles, Julian Jerome’s (William DeVry) life. Could Drew find her passed out from too many sleeping pills, or have to restrain her from jumping off a steep cliff?

It’s not likely that Kim would try to go to sleep permanently or anything like that until after they have scattered Oscar’s ashes, because that would mean that she was breaking a promise to Oscar. She won’t do anything that drastic until after they have scattered his ashes, but afterwards, it’s anyone’s bet what could happen! But in any case, Drew will find himself needing to tend to Kim and help her make it through the loss of Oscar, and try to help find her a reason to live.

Drew is suffering Oscar’s loss also, even though he did not get to spend as much time with him as Kim did. He missed out on the diapers, the first tooth, the first step, the first day at kindergarten, and teaching him to shave; but that doesn’t mean that Drew is not holding pain and grief inside as well as Kim.

GH Spoilers: Drew Is suffering From Oscar’s Loss As Well

He had given Oscar a summer internship in Aurora and was planning to ask him to run it after he retired, and probably was leaving it to Oscar and his daughter with Sam McCall (Kelly Monaco) Emily Scout Cain (Palmer and Poe Parker) in his will. General Hospital viewers may see the parents break down emotionally in their grief together, and will see why Drew has to tend to Kim and how he does it in Wednesday’s episode.