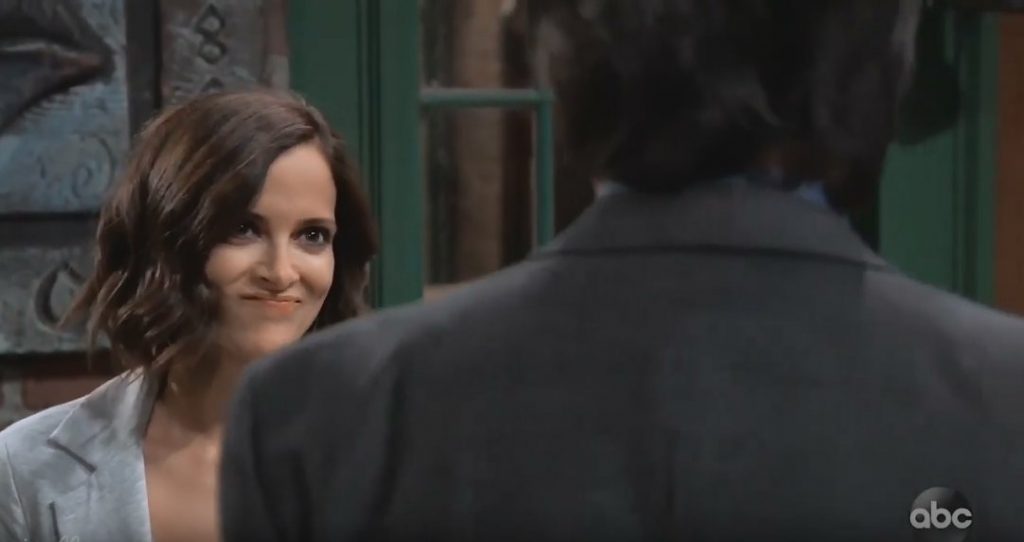 General Hospital (GH) spoilers tease that the Baby Finn – or should that be Baby Honeybun – secret will soon be revealed on General Hospital; will Hayden Barnes (Rebecca Budig) reveal her secret to her sister Elizabeth Baldwin (Rebecca Herbst) first when she lets her guard down around her?

Viewers will recall that Hayden left Port Charles two years ago, pregnant with Dr. Hamilton Finn’s (Michael Easton) child, and left him stranded at the altar at the church where they were getting ready to marry. Even Elizabeth didn’t have a heads-up that Hayden was leaving or breaking her engagement to Finn!

Curtis Ashford (Donnell Turner) tracked her to a motel, where he found a goodbye note, where she lived and wrote to Finn that she had miscarried their baby. Then in the fall of 2018, Curtis receives a letter to be given to Finn, which he does, inviting him to meet her in Rome, Italy. However, by that time he was involved with Anna Devane (Finola Hughes) and joined her on a mission to Cuba, to bring back Liesl Obrecht (Kathleen Gati) to justice for kidnapping and torturing Peter August, (Wes Ramsey) who Anna believed may have been her long-lost son with Cesar Faison (Anders Hove).

GH Spoilers – Hayden Barnes Has Had Some Close Calls Lately

Hayden did not bring the baby, who would be two years old now and a little girl, with her to Port Charles but she may be close or elsewhere in town. She calls her and talks to her on the phone, and she had a finger painting that Finn saw, that she attributed to her nephew Aiden Webber (Jason David).

Aiden busted Hayden by later telling Finn that he doesn’t finger paint anymore, he’s outgrown it, and then Finn overheard her on a call and asked who “Honeybun” was – she came up with a quick cover story about her dog! WHY she continues to keep the child a secret is – well, a secret! Even Jasper Jacks (Ingo Rademacher) her boss and partner in the quest to find the codicil to Mikkos Cassadine’s (John Colicos) will know she has a toddler, and he’s called her on it!

He can’t understand why she won’t tell Finn about his baby and why she’s keeping her a secret from even her sister, Liz! Finn’s suspicious – he talked to his brother, Detective Harrison Chase (Josh Swickard) about it in recent episodes, and will also talk to Alexis Davis (Nancy Lee Grahn) to get her take on the discrepancies!

General Hospital Spoilers – Hayden Barnes Moved In With Her Sister

Hayden moved in with Elizabeth after finding out her new husband, Franco Baldwin (Roger Howarth) had been the victim of a memory transfer of Drew Cain’s (Billy Miller) pre-2012 memories, which he had done in saving his stepson Cameron Webber (William Lipton) from the same fate!

Will she let the truth about “Honeybun” slip to Liz and then have to explain why she lied to Finn about the baby, then didn’t bring her to live with her in Port Charles when she came back to town? Will “Honeybun” be a happy distraction for Liz if she can convince Hayden to come clean and bring her to live with them? Liz may be a lot of things, but she is an excellent mother and she will have some hard questions for her sister about Baby Girl Finn!

Days of Our Lives Spoilers: Does Brady See A Future with Kristen? Eric Martsolf Speaks Out!