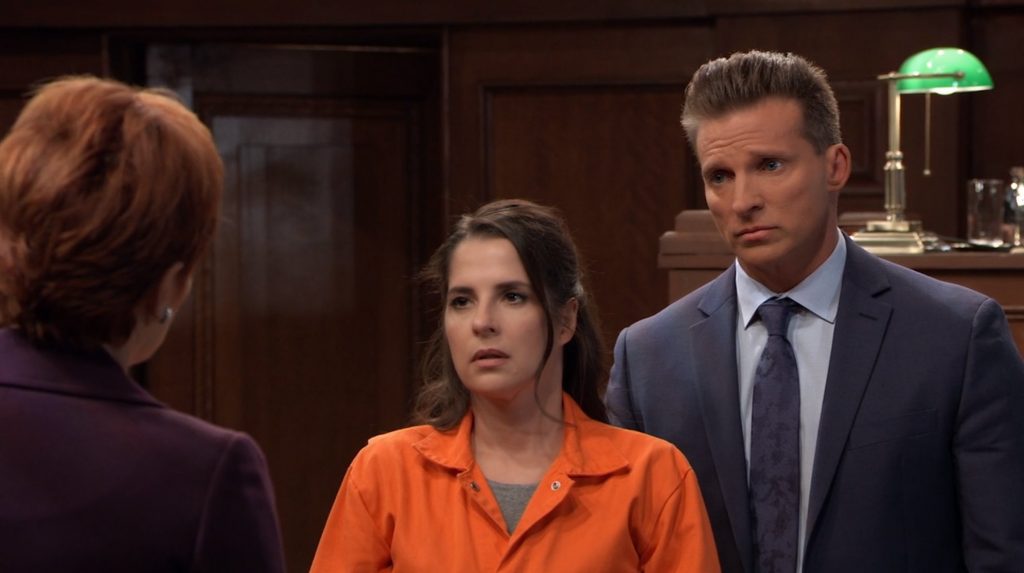 General Hospital’s Jason Morgan (Steve Burton) has never been one to stand by and do nothing, especially when it comes to Sam McCall (Kelly Monaco). Why is Jason, and Jasam fans being forced to watch this slow torture of Sam’s trial when Jason would have had her out of custody long before now?

When General Hospital’s Carly Corinthos (Laura Wright) was in Ferncliff, Jason broke her out and took off to a safe house with her in no time. Of course it was a prop for Franco Baldwin’s (Roger Howarth) redemption number 10, but still. If Jason is going to break Carly out of a mental facility, he would have already broken Sam out of police custody and whisked her off to Sonny’s island or at least a safe house while Damien Spinelli (Bradford Anderson) worked with Diane Miller (Carolyn Hennesy) to prove her innocence.

Jason would never have let Sam go to prison in the first place. Sam would have been protected as soon as she was charged the first time. So why is Jason acting so out of character when it comes to the woman he loves?

General Hospital’s Jasam fans have been waiting for our kick-ass couple to morph back into themselves for over two years now. Let’s be honest, Sam saw more action when she was pregnant with all three of her children than she’s seen trying to save herself from Shiloh Archer (Coby Ryan McLaughlin). Sam fought off ex-boyfriend Niko Dane (Ryan Alosio) while pregnant with Baby Lila. Sam was abducted by Ronnie Dimestico (Ronnie Marmo) while pregnant with Danny Morgan (Porter Fasullo). Sam even saved Franco while pregnant with Scout Cain (Ella Ramacieri). Sam barely got to defend Jason by shooting Shiloh and ends up in prison. What happened to the good guys getting a win occasionally?

General Hospital Spoilers – Where Are The Payoffs?

General Hospital fans expect to have some payoff for our favorite characters and yet Jasam fans continue to wait and hope. Our couple is supposed to be together but they have spent more time apart while “together” than while they were separated. When is Jasam, and Jasam fans going to get a payoff? Why do we continue to be forced to watch our couple pulled apart by circumstance? When will we have some happy couple and family time?

Jasam fans want our couple back in full capacity, not this half together version that has no time together at all. It’s time to make people pay. Give us the Jasam we know and love and stop pulling them apart. We have waited years for this reunion, make it worth our while. Let Jason break Sam out of jail and give us some adventure.