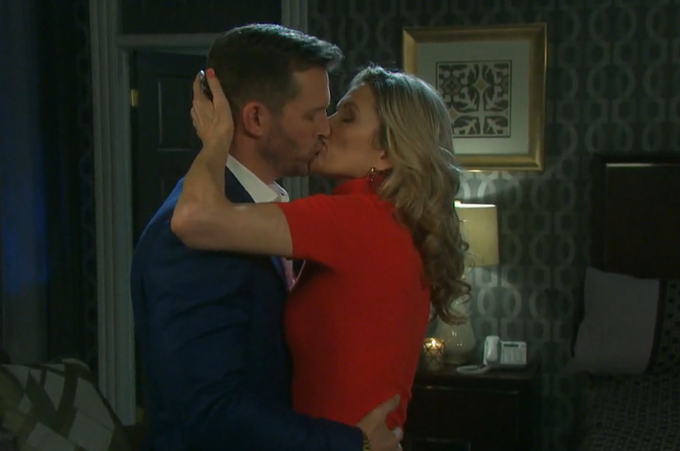 Days of Our Lives spoilers tease that Friday, September 20 will be another day of exciting drama for Days of Our Lives viewers as tense situations and confrontations ramp up between the Salemites!

Kristen DiMera (Stacy Haiduk) presses Xander Kiriakis (Paul Telfer) for details about Sarah Horton’s (Linsey Godfrey) pregnancy. As long time Days of Our Lives viewers know, Kristen has done some pretty desperate things such as embryo theft and transplant into her own body, wanting to have a child of her own.

It looks like she may have this in mind for Sarah’s embryo also, Xander having let the news slip to Kristen. Sarah had decided in Thursday’s episode to terminate her pregnancy, so Kristen figures she may as well give Sarah another option to consider but wants Xander to do the dirty work of asking!

Elsewhere, Jennifer Horton (Melissa Reeves), bound and gagged in a chair and held captive by Dr. Henry Shah (Piter Marek), who has become obsessed with her, tried to contact Jack Deveraux (Matthew Ashford) by wiggling one hand out of her restraints, hoping to draw someone’s attention with her screams and maybe text Jack on her cell phone. Unfortunately, her captor, who had left the hotel room came back before Jenn could get a chance in Thursday’s episode; will she in Friday’s?

As Days of Our Lives viewers know, Vivian Alamain (Robin Strasser) who had tried to kill Kate and then buried her last week, had disguised herself as a surgeon and had snuck into Kate’s hospital room and squeezed on her oxygen tubes, cutting off air to her.

Will Horton (Chandler Massey) eavesdrops on Stefan DiMera (Brandon Barash) and Vivian as they are talking. Will is sure that Vivian is the one who tried to kill his Grandma Kate and he, as an investigative reporter, decides to try and get some proof. Will probably has a recorder going on his cell phone and maybe tries to videotape them as well, if he can get some good shots!

However, if he had checked into the legalities of such a maneuver, he would know that kind of evidence will not be allowed in court. But he can certainly take what he records to the Salem police and get a deeper investigation started! It’s not real difficult to get DiMeras investigated; if nothing else, he can take it to John Black (Drake Hogestyn) and John can get the police to investigate!