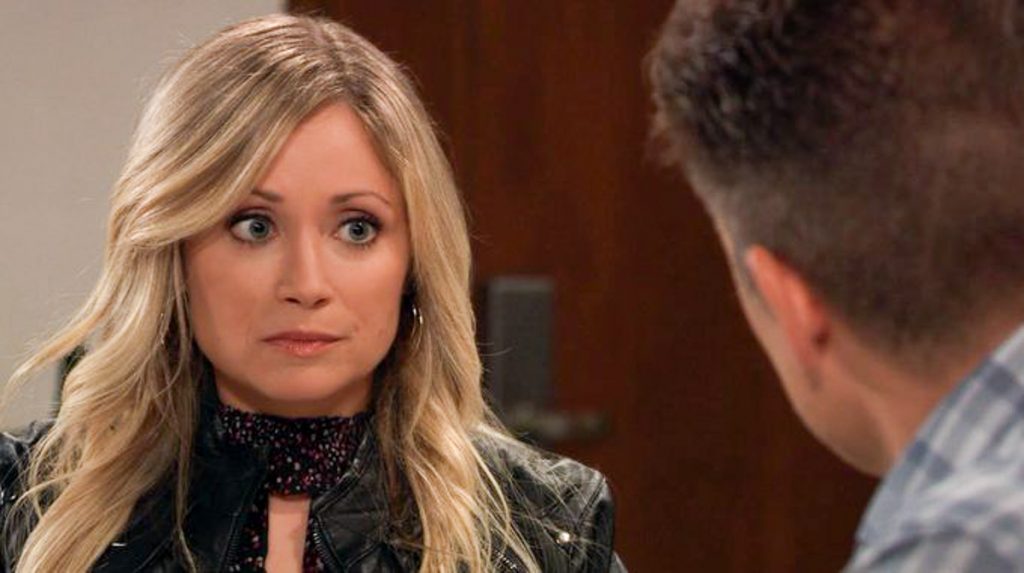 At Kelly’s, Lulu Spencer (Emme Rylan) and Maxie Jones (Kirsten Storms) catch up. Lulu is probably talking about Maxie and Peter August (Wes Ramsey) moving in together, and tells her it’s about damn time! Other General Hospital spoilers say Charlotte Cassadine (Scarlett Fernandez) will have dessert with Maxie and Lulu so viewers can expect them to have some company!

At General Hospital, Bobbie Spencer (Jacklyn Zeman) has some news for Julian Jerome (William DeVry); apparently the two are talking about Lucas Jones, (Ryan Carnes) Bobbie’s adopted son and Julian’s birth son, and Bobbie tells Julian that only one man will ever truly be Lucas’ father, and viewers can be sure that she is referring to the late Dr. Tony Jones (Brad Maule)!

Back at Kelly’s, Willow Tait (Katelyn MacMullen) tries to reassure Brad Cooper (Parry Shen) about Julian. Apparently he has also been talking to her about Julian setting him up and trying to break up him and Lucas, which is the truth, but Brad isn’t sure anyone is believing him. Willow tells Brad that Julian only wants the best for Wiley Cooper-Jones (Erik and Theodore Olson).

Elsewhere, most likely at the Port Charles cemetery at Dr. Tony Jones’ grave, Lucas says out loud that he would give anything to talk to him again. It looks like Lucas will get his wish, as Brad Maule makes an appearance on General Hospital for the first time in over twenty years! Ghost Dad Tony approaches Lucas as he makes his wish!

At Shadybrook Sanitarium, Jasper “Jax” Jacks (Ingo Rademacher) visits Ava Jerome (Maura West). He tells her that what has happened to her is his fault; will he spill the beans to Ava about Nikolas Cassadine (Marcus Coloma)? Probably not, but he might talk to her about Helena Cassadine’s (Constance Towers) portrait! He may explain the urgency to retrieve the portrait and that it may mean the difference between Spencer Cassadine (Nicolas Bechtel) regaining his inheritance or not.

At Rice Park, Detective Harrison Chase (Josh Swickard) and another police officer respond after Sam McCall’s (Kelly Monaco) 911 call advising that an ambulance is needed because a guard is down and a prisoner escaped. Viewers will recall that Cassandra Pierce (Jessica Tuck) beat a guard over the head with a shovel and then escaped into a waiting van driven by Nikolas Cassadine! Chase and the other officer rush towards the scene with Chase shouting “Keep your hands where I can see them”!