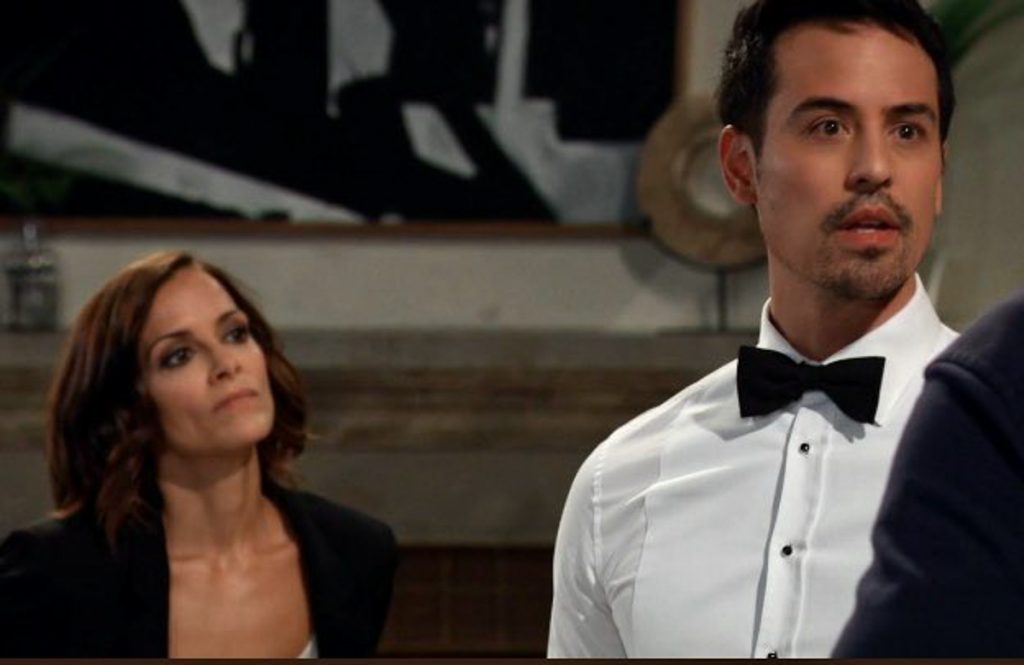 General Hospital spoilers tease that Thursday, November 7 will be another episode full of drama, confrontations, and excitement for GH fans!

Something’s bothering Valentin Cassadine (James Patrick Stuart)! Nina Reeves (Cynthia Watros) asks Valentin what’s bothering him, and he replies, “Jasper Jacks”! (Ingo Rademacher)! Valentin should be bothered by Jax, he is in cahoots with several people to take Valentin down, and he has his romantic eye on Nina on top of everything else! Little does Valentin know that Cassandra Pierce (Jessica Tuck) is also in cahoots with Jax – indirectly – because she’s in cahoots with a relative that Valentin thought was no longer a threat!

Another complication arises for Jax when his daughter, Josslyn Jacks (Eden McCoy) decides she wants to move in with her dad! He already has an unexpected complication named Nikolas Cassadine (Marcus Coloma) staying with him, but what can he say? Viewers will recall that Carly Corinthos (Laura Wright) and Jax discussed Joss staying part time with Jax and part time at the Corinthos home after she came home drunk from the Halloween party aboard the Haunted Star!

Meanwhile, Carly has a talk with Sasha Gilmore (Sofia Mattsson) at Kelly’s. Carly is basically giving Sasha her stamp of approval as she tells her that her owning what she did goes a long way with her! Michael Corinthos (Chad Duell) and Sasha are continuing to become closer and closer, and Michael more committed to Sasha as time goes on, and so Carly knows that they are very serious! Carly wasn’t happy that Sasha had lied about her being Nina Reeves’ daughter, but she has also realized that Sasha definitely isn’t just a lying liar who lies, as opposed to Nelle Benson (Chloe Lanier)!

Speaking of Nelle, Attorney Martin Gray (Michael E. Knight) is at Pentonville Prison talking with her. Nelle has been talking about someone, a man, of dubious distinction to her attorney, and he asks her exactly who this guy is! Chances are, she is talking about Brad Cooper (Parry Shen) but it’s always possible she could be talking about someone else; she might be asking Martin to consider representing Ryan Chamberlain (Jon Lindstrom)! A few weeks ago General Hospital viewers will recall that Ryan had asked Nelle to do him a favor, and this might be it!

Sam McCall (Kelly Monaco) and Cassandra Pierce (Jessica Tuck) are outside the walls of Pentonville Prison in Rice Park, in Port Charles. They are on work detail and as was discussed in Wednesday’s episode, they will be doing gardening in the park, probably pulling weeds, possibly planting new bulbs to come up in the spring. Viewers will recall that Nikolas is again breaking Cassandra out of the prison after she called him and blackmailed him into doing so. That is probably how such a dangerous prisoner got out on work detail, and he’s got a contact who is a guard in the prison who will look the other way if she’s assigned to the work detail as well.

Nikolas must be getting cabin fever at Jax’s house or else he and Jax may be trying to figure out how to where to put him where he won’t be recognized, so Joss can live part time with her father. Nikolas is talking to someone and obviously has an idea, saying that the odds of him getting recognized are non-existent! Unless Nikolas has one of those masks from Cesar Faison (Anders Hove) from a few years back, which actually sounds possible the more we learn about “NewNik”, he is probably just a tad too confident!

General Hospital Spoilers – Will Hayden Make A Deal Behind Husband Nikolas’ Back?