General Hospital spoilers for Friday, August 16th tease an exciting day of drama, tense situations, and questions with no easy answers for viewers and the residents of Port Charles!

Detective Harrison Chase (Josh Swickard) and his girlfriend Willow Tait (Katelyn MacMullen) have an intimate meal and talk at a Port Charles restaurant and Chase wants to talk about their relationship and its direction. He noted when Willow was all freaked out the night of Shiloh Archer (Coby Ryan McLaughlin) and Dr. Arthur Cabot’s (Time Winters) arrest because he sent a text with the word “hospital” in it.

He asks her if his job might be getting too much for her. Of course, as General Hospital viewers will recall, earlier that day she had been talking with Lulu Falconeri (Emme Rylan) who warned her about what being married to a cop could be like!

At General Hospital, Dr. Hamilton Finn (Michael Easton) has a warning for his ex-fiancee Hayden Barnes (Rebecca Budig). He has been treating Sasha Gilmore (Sofia Mattsson) for an unknown strain of influenza, and he warns her that she has been exposed to a serious contagion. 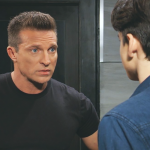 The presumption is that he is talking about Sasha’s illness, since Hayden works closely with the Crimson staff. He will also warn her to look out for symptoms and get checked immediately. Hayden knew Sasha had the flu. Finn is likely letting her know it’s not just any old flu, but one that there is still no treatment for.

Also at General Hospital, Drew Cain (Billy Miller) grabs Dr. Monica Quartermaine and asks her if there is somewhere they can talk privately. He is undoubtedly going to tell her what happened to Franco Baldwin (Roger Howarth) and that he will no longer be able to perform his art therapy job at General Hospital. One would think she would already know from Franco’s hospital records since she is Chief of Staff. But Drew may be planning on discussing some other things as well.

At the Baldwin house, Cameron Webber (William Lipton) and his mother Elizabeth Baldwin (Rebecca Herbst) are talking, obviously about what happened to Franco. She has warned him that the news will be bad. He responds that he already knows it’s bad because he was there when it happened! However, he doesn’t know the aftermath of what happened when Franco woke up as pre-2012 Drew. And that is probably what his mother is trying to explain to him.

At the Corinthos house, Sam McCall (Kelly Monaco) has stopped by to talk to Sonny and Carly Corinthos (Maurice Benard and Laura Wright) and tells them she has bad news. This is probably the same bad news that Liz was trying to explain to Cam, that Franco has been the victim of a memory transfer, but this would have a lot to do with the Shiloh situation they have all been working on, because Franco now would know what happened in Afghanistan. The bad news might be that he won’t tell anything because he will regard it as classified military information.

Over at the Floating Rib, Franco encounters his twin Jason Morgan (Steve Burton) who looks concerned. It seems like Franco wants to fight. He rather sarcastically calls Jason the “rich kid with his face.” The interesting thing is that he calls him Jason Quartermaine, not Jason Morgan. It will be interesting to see how he knows him by his old name!