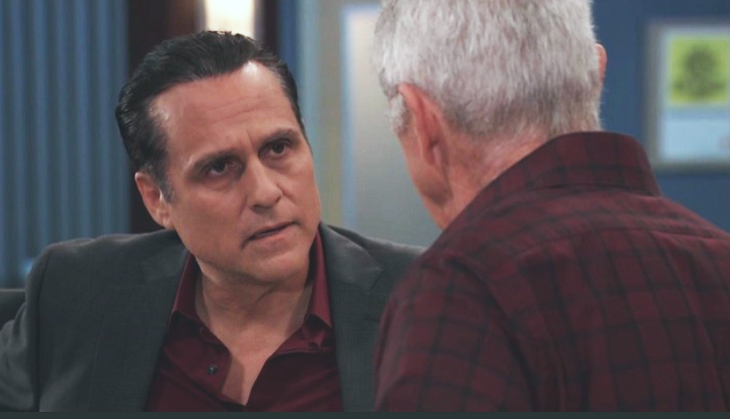 This early edition spoiler from Soap Opera Digest seems to point to the meeting being connected one of two things. It could be the ongoing situation with Dante Falconeri (Dominic Zamprogna). Or it could possibly be about the aftermath of Shiloh Archer (Coby Ryan McLaughlin) kidnapping Sam McCall (Kelly Monaco).

Drew and Curtis Ashford (Donnell Turner) will call Sonny for assistance with that situation. So it stands to reason Robert might want to talk to Sonny as a witness. Robert, may also want to talk to Sonny about the poisoning of Sasha Gilmore (Sofia Mattson). She has been deathly ill and may not be able to speak for herself.

As General Hospital viewers will recall, Michael’s grapefruit was injected with a likely poisonous substance by Cassandra Pierce (Jessica Tuck) on Sonny’s island. Robert may want to talk to Sonny about what he might know.

General Hospital spoilers for Friday, August 9 tease that Robert will have disappointing news. Down the road spoilers for the week of August 12 tease that Sam and Jason will regroup with Robert after being rescued. So this may be when he meets with Sonny as well since Shiloh has many charges against him, including those that involved Kristina Corinthos-Davis (Lexi Ainsworth). Sonny, Sam and Jason rescued her from the cult. Sonny was involved in the rescue of Sam in her kidnapping as well.

General Hospital Spoilers – Will Franco Baldwin Tell Him Where The Money Is?

Robert may be talking with Sonny about either or both cases involving Shiloh, since he would be the one prosecuting him. Viewers will recall that the information Shiloh was trying to get from Drew’s memories was if he knew where Shiloh had money hidden in Afghanistan.

Other General Hospital spoilers tease he may have had Dr. Winters implant Drew’s memories into Franco Baldwin (Roger Howarth) after kidnapping him. So if this were to be successful and Franco tells him where the money is, he could even have skipped the country by this time to retrieve the money. And this would make it a WSB case since it would be out of Robert’s jurisdiction as a DA.