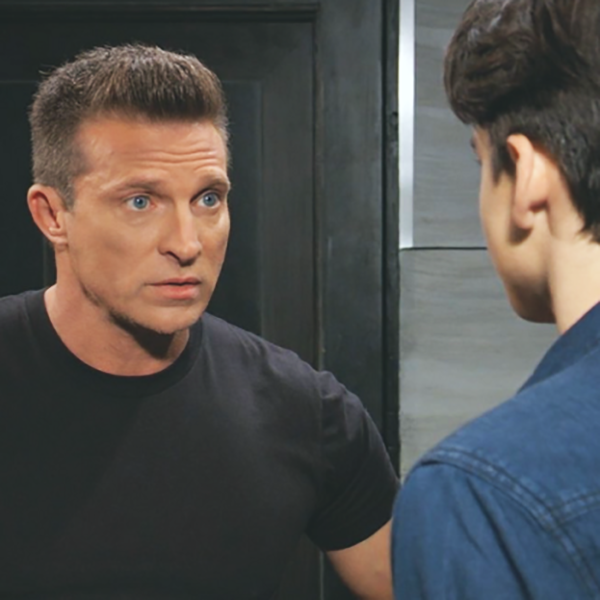 General Hospital spoilers tease that Jason Morgan (Steve Burton) will remain suspicious of Dev Cerci’s (Ashton Arbab) motives, and question whether Sonny Corinthos’ (Maurice Benard) decision to give him a job at the Corinthos Coffee warehouse was really the best idea.

Jason never has trusted the Turkish teen. He also didn’t think it was a very good idea for Dev to be staying in the Corinthos home, especially not alone with Josslyn Jacks (Eden McCoy). He doesn’t like him being there with Carly Corinthos (Laura Wright) either. This, despite the plethora of guards around that are keeping an eye out!

Jason apparently gets that sixth sense of suspicion about Dev. Red flags come up for him even though Sonny and Carly tell him Dev’s not dangerous. It didn’t help Jason learning to trust Dev when he caught him knocking over Laura Collins’ (Genie Francis) purse at the Metro Court. He was intending to rob her in a recent General Hospital episode!

Jason is worried Dev may not be who he says he is, and that he could be not a teenager at all. He wonders if he’s a young looking plant sent by some enemy of Sonny’s. He may have been sent to either take over his mob territory or acquire other intel that could be used against Sonny.

There is also the possibility that even if Dev is who and what he claims to be, he won’t give up that pickpocket lifestyle. He may even steal from the warehouse. Or worse yet, he might find things from Sonny’s other business and steal them or give the intel to the authorities. For all Jason knows, this “kid” could even be a mercenary selling Sonny’s secrets to the highest bidder!

So far, Dev has not been caught doing anything too bad, other than the incident where Jason caught him trying to rob Laura’s purse. And Sonny put him in the warehouse after the power failure. Dev overstepped by giving all the guests the most expensive champagne after Carly announced everything would be comped. Dev meant well but didn’t realize how much money that mistake cost Carly.

General Hospital Spoilers – A Situation Will Occur At The Warehouse

Upcoming General Hospital spoilers say Sonny will have to attend to a situation at his warehouse. Could Dev be part of, or the cause of this situation that Sonny has to intervene in? If he doesn’t cause it, he may be there nonetheless and possibly even in need of rescue.

If he does need rescue, it won’t be the first time. He also needed rescue by Sonny and Dante Falconeri (Dominic Zamprogna) when he got caught up between the gunfire when Sonny and Dante escaped Raj Patel’s (Noshir Dalal) men a few months ago. It’s even possible they could show up at the warehouse looking for Dev. This would be in spite of all of Sonny’s efforts to keep him safe.

General Hospital Rumor: Is Jared The Father Of Hayden’s Baby?