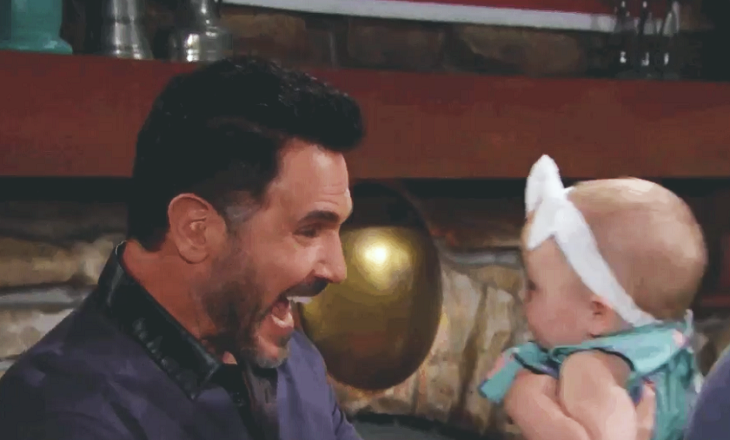 The Bold and the Beautiful recap for Thursday, August 15 finds Reese Buckingham (Wayne Brady) arrested for the baby swap scandal. Ridge Forrester (Thorsten Kaye) ousts both Zoe Buckingahm (Kiara Barnes) and Xander Avant (Adain Bradley), even though both try to tell their side of the story. And Bill Spencer (Don Diamont) gets to meet his granddaughter for the first time.

It begins at the cabin, where Hope Logan (Annika Noelle) asks Liam Spencer (Scott Clifton) about all of the baby milestones she missed with Beth. Bill and Katie Logan (Heather Tom) arrive with their son Will  Spencer (Finnegan George). Will calls himself a baby inspector and wants to see Beth.

Everyone agrees that it’s great to see the family together again while Bill admits that he would like to see the doctor who did all of this behind bars. Bill proclaims that he can’t wait to spoil his granddaughter. When alone, Bill admits to Liam that this entire situation hit him very hard. Liam says he needs his father, while Bill also adds that he needs his granddaughter in his life, too. Bill tells the baby that her life is going to be a good one.

She also notes that Ridge is hesitant to call the authorities because of his son Thomas Forrester’s (Matthew Atkinson) involvement. Brooke asks if Thomas has called back yet and Ridge says that the last thing his son wants to do right now is reach out to his father.

Later on, Zoe and Xander are confronted by Brooke and Ridge. Xander tries to tell his side of the story, but Ridge is having none of it. However, Xander tells him that it was Thomas who tried to keep everyone quiet and even threatened their lives at one point. Xander also points out that it was Thomas who killed Emma Barber (Nia Sioux) when she tried to tell Hope the truth.

Ridge dismisses everything and points out that only a five-year-old had the courage to tell the truth. When Ridge asks Zoe why she didn’t turn in her father, she says it’s because it was the first time that he showed that he cared for her. Zoe tries to defend Flo and says that she tried to tell the truth multiple times.

Ridge then gets a call from the authorities who tell him that Reese is in custody. Ridge looks back at Zoe and Xander and fires both of them on the spot. Brooke agrees with the decision. He tells them to never step another foot in Forrester Creations ever again.