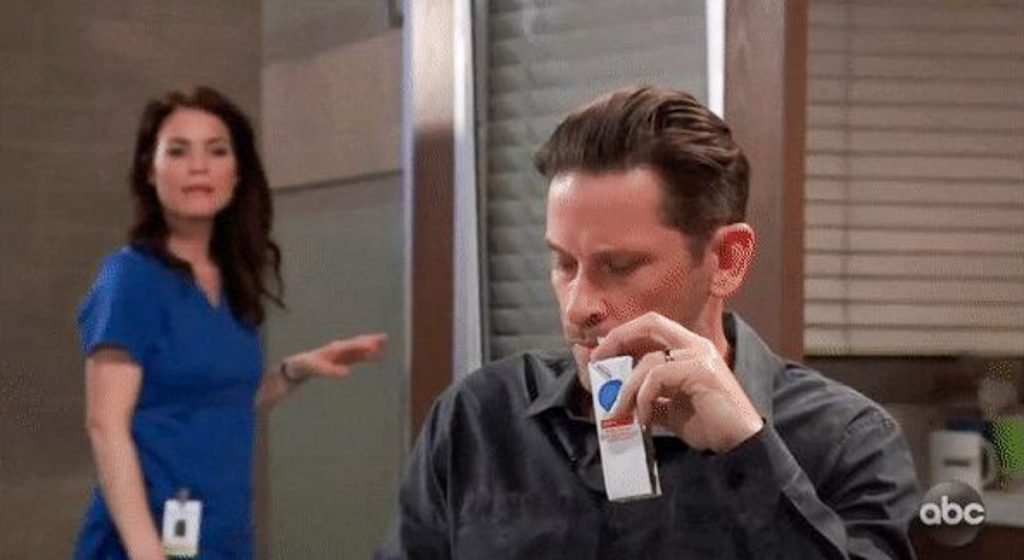 General Hospital spoilers tease that Franco Baldwin (Roger Howarth) will have a realization; could some of his own Franco memories be surfacing? If so, this may be the first step towards “Frankendrew” becoming fully Franco again!

General Hospital viewers will recall that Drew Cain (Billy Miller) said to Elizabeth Baldwin (Rebecca Herbst) when he was talking about getting the money from Cameron Webber’s (William Lipton) car that had been willed to him by Oscar Nero (Garren Lake Stitt) that he had a flash – not quite a whole memory – but he knew that he should buy that car when it came available. He described it as more of an instinct, which fits perfectly with when he, and everyone else, believed he was his twin Jason Morgan (Steve Burton) and flew everyone home from Cassadine Island when Nikolas Cassadine (most recently Nick Stabile) presumably died there. Fans noted that Jason had never learned to fly a plane, although a Navy Seal may have learned! Knowing how to fly the plane must have come from Drew’s instincts underneath Jason’s memories! Fans will also recall several times where Drew seemed like his memories would surface at any given moment in several situations; it could be seen in his eyes! It is not at all unreasonable to think that Franco may have the same types of experiences in among all the Drew memories in his brain now!

GH Spoilers – Franco Baldwin May Find Himself Knowing How To Draw

“Frankendrew” may find himself doodling on a piece of paper out of boredom and realize he has made a very professional looking sketch, for instance – and the Drew part of him will realize that is something that he as Drew never had the talent for. But the Drew part of him will know that Franco had been an artist; and it may put him to thinking. He may find other skills emerging that Franco had that he doesn’t recall himself as Drew having. He knows, consciously, that he is Drew in Franco’s body and how it happened, but it probably has not been real to him just yet. He just has to look in the mirror to know that it’s true. He will need to make a decision whether it is the right thing to do to live as Drew or to give Franco a chance to live his life. He knows his real body, “the other Drew” has been declared dead by the Navy, and he knows if he makes the decision to undergo this very risky operation that neither he nor Franco may survive it!

General Hospital Spoilers: Chase Meets His Niece &#8211; Inspires Him To Ask Willow About Having Another Child? @celebratesoaps #gh #generalhospital. https://t.co/h7rqczY1vf

When “Frankendrew” saw Kim Nero (Tamara Braun) in court admit that she had drugged and tried to rape “the other Drew” – himself in the future, from his perspective – to conceive another baby with him to replace their son Oscar Nero (Garren Lake Stitt) who had died, he began seeing her through different eyes. This is something he never saw in her before when in his memories, they were so heavily involved. He understands she was desperate, but he also understands and knows that she has changed! This realization, along with his having flashes of Franco’s memories and skills, may help him make the choice to risk the memory transfer reversal because Kim was the main reason he wanted to keep living as Drew, and now she is not such a motivation!