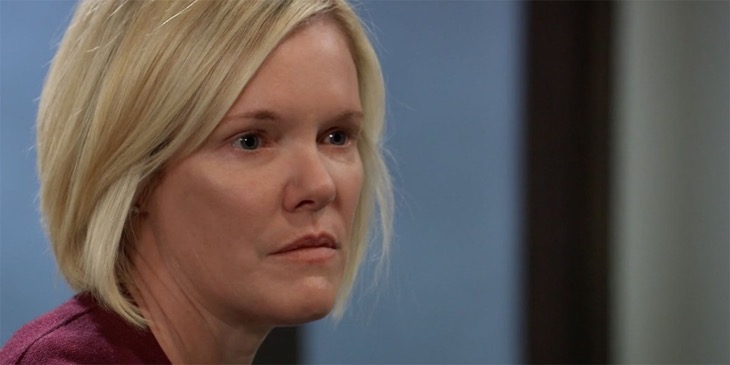 General Hospital spoilers tease that Franco Baldwin (Roger Howarth) may become a sort of inadvertent security guard to the women he loves and has friendships with until Ryan Chamberlain (Jon Lindstrom) is “unmasked” and caught! However, he will scare or at least startle one female friend; Ava Jerome (Maura West)!

Franco and Ava have a long history, going back over twenty years to when they both lived in New York City and were involved in the art world; he as an artist, she as a new gallery owner learning the business. They were also involved with each other, and for over twenty years Ava misled him to think that Kiki Jerome (Hayley Erin) was his daughter.

He only found out the truth after they all moved to Port Charles several years ago, and he was found not to be Jason Morgan’s (Steve Burton) long-lost twin after all, and therefore not a Quartermaine (Ava’s reason for lying to him about Kiki’s paternity!)

"If they think they can keep Avery from me, just because I shoved Carly in the mud, where she deserves.." THANK YOU @ScottCSickles for the truth telling and equal standing of the transgressions of Ava/Carly/Sonny. AND the counterpoint of Anna/Finn cuteness! #GH pic.twitter.com/EPfWAq6Lfo

As GH viewers know now, Franco thinking he was Jason’s twin could stem back to childhood memories, only it was his little friend “Andrew” who grew up to be Drew Cain (Billy Miller) who was Jason’s long-lost twin, and Franco and Jason and Drew are actually distantly related….their mothers were first cousins!

Franco will startle Ava when he checks up on her, spoilers aren’t clear exactly where that takes place; whether he sneaks up behind her in a public place such as Kelly’s, The Metro Court, The Floating Rib, or Charlie’s Pub, or whether he comes to her apartment.

Ava has become very nervous about the serial killer (who she doesn’t realize she’s living with) since Lulu Falconeri (Emme Rylan) also paid her a visit and warned her to watch out for bizarre behavior in “Kevin Collins”! So even if he pays her a visit at home, she may be very nervous about who might be at her door, and even Franco could scare or startle her if she’s not expecting him! Keep watching GH and checking General Hospital spoilers frequently to see what happens in this ever-evolving murder mystery!