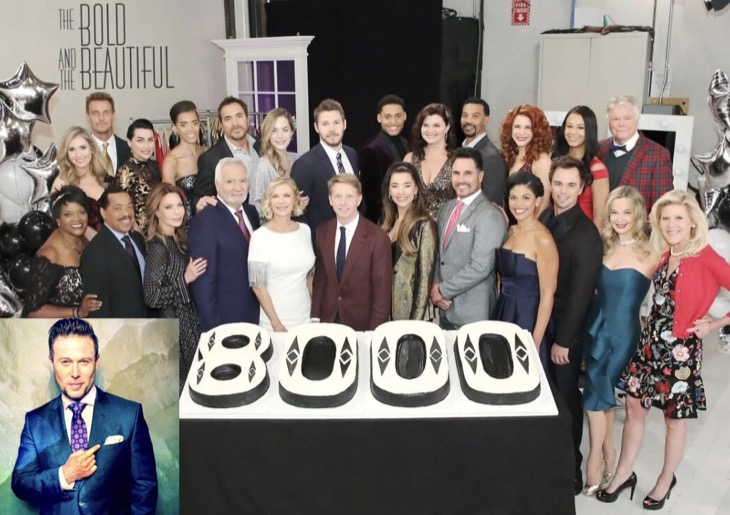 The Bold and the Beautiful (B&B) alum Jacob Young voiced his disappointment for not being included in the #Bold8000 episode photo shoot. After being taken off contract over the summer, Young said he has never felt so sad that the network has turned their back on him. And, as it turns out, many of the B&B feel the same way.

Young has been vocal about his contract status with CBS. He said after so many years of playing Rick Forrester, it is sad that he wasn’t included in any of the promotional pictures for the big 8000th episode. He feels like he should have been included as he helped B&B become what it is today.

Jacob admitted that it is even more of a sting that Karla Mosley (Maya) is back on contract with the show but he isn’t. He isn’t sure what he could have done wrong and he’s given up hope that he will ever appear on the CBS soap opera.

.Wait, Wait, Wait! Hold The Presses!!! After GREAT consideration, Rick was actually added to the #8000 photo! Look at how happy he is to see Maya after his kidnaping! 😍 To be continued…. pic.twitter.com/CxTF8ZGWyQ

Since many Bold and the Beautiful fans want to know why Young is no longer on the show, he created a story to tell them. Of course, it isn’t true, but it is worth a read for the giggles.

Young tweeted, “ I know, but a lot of people keep asking, did you leave the show? And well, the truth is Rick was kidnapped in Paris, stabbed, ran over (back and forth), dirt kicked over and left for dead in a cold shallow grave. Guess what, he dug himself out. 8,000 or 8 million. He’s still out there.”

Many B&B fans continue to question why he wasn’t included in any of the #BOLD8000 promo pictures. As of now, CBS has yet to comment. Don’t forget to come back later for more Bold and the Beautiful (B&B) spoilers, news, and casting updates!

It’s incredibly sad, makes me feel like Ive been given up for adoption. I don’t know why I wasn’t included in the photo. https://t.co/O3cEP3IaUm

Young and the Restless Spoilers: Did The Rosales Family Replace The Winters?