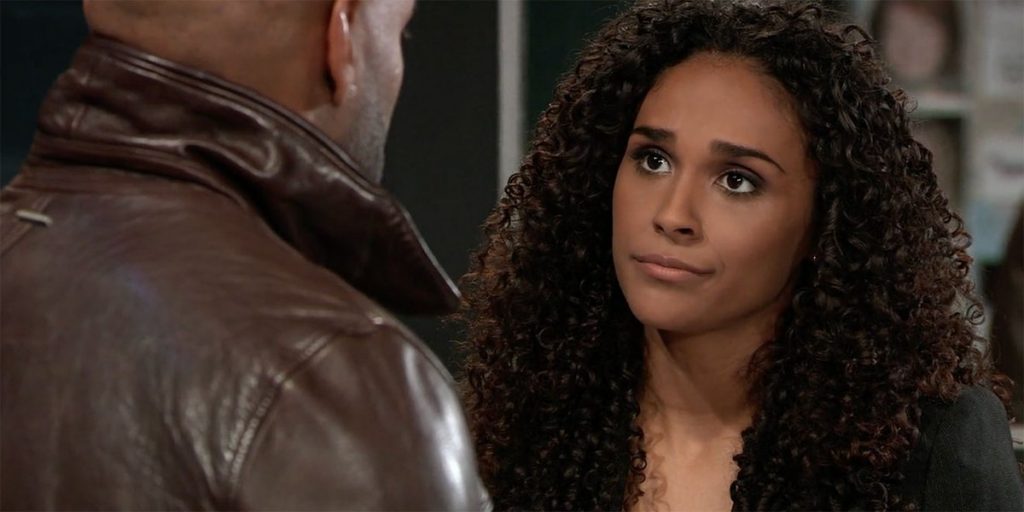 Ryan (Jon Lindstrom) comes to the meeting, and Lulu (Emme Rylan) tells him if he’s there to make a scene he can leave. Laura says everyone is welcome at the meeting. Julian opens the meeting and mentions the election is one day away. Lulu is the mediator of the meeting, and she vows to be fair and unbiased. The meeting is an open forum, and the audience begins to ask questions.

Laura says some things are better since they started to rebuild the city, but she wants to widen the circle. Ned talks about the people helping him. Laura wants other people from different backgrounds involved. Someone asks Ned if his business background help him to run the city. Ned says if you don’t have businesses, nothing else works. Laura says the government cannot be run as a business because it is not for profit. Economy and money are not everything nor should they be.

WATCH: Laura and Ned face off, Jordan's on the hunt for a serial killer, and Stella prepares Mike for his new reality. Happy Friday! #TGIF #GH55 pic.twitter.com/6tz4FKcuLP

Ryan wants to make a statement; it’s high time he made his intentions known. Ryan says he supports Laura even though they are separated and divorcing. Laura promises to become an advocate for mental health if she is elected. Laura sees no reason to be mayor if you can’t help with issues that need attention. The meeting ended with Ned and Laura wishing each other well. Laura thanks Ryan for his support. Lulu leaves to turn in a story on the meeting. Laura has to meet with Sonny (Maurice Benard), Ryan follows her out. Ryan follows Laura to Sonny’s gym and sneaks in behind her.

Ned and Laura go toe-to-toe in their first mayoral debate. What should they expect from the voters of Port Charles? #GH55
A dramatic, new #GH starts RIGHT NOW on ABC! @GenieFrancis @wallykurth pic.twitter.com/hmFwoaeVLK

General Hospital’s Nina (Michelle Stafford) and Maxie (Kirsten Storms) show up for the self-defense class, and Chase (Josh Swickard) is teaching it. Willow (Katelyn MacMullen) and Liz (Rebecca Herbst) show up as well. Liz speaks to Willow. Nina introduces Maxie to Willow as well. Maxie and Willow talk about earrings. Nina wants to know why Maxie is nice to Willow. Maxie says Lulu says Willow is great. Willow asks how Aiden (Jason David) is going, Liz says he is improving some time.

Chase is teaching self-defense today, West Coast! But he might get much more than he bargained for from his students.
A brand-new #GH STARTS NOW on ABC! @josh_swickard #GH55 pic.twitter.com/BiskrBj0ph

Nina says this could have been taken care of within two days of school. Liz blames the parenting, and it’s not Lulu. Chase opens the class, and they are there to learn to protect themselves. Maxie is ready to start class. Liz and Nina begin arguing in the class instead of paying attention. Chase has Willow help him with a demonstration. Maxie tries to calm down the argument between Liz and Nina.

Chase calls Nina up to help him demonstrate. Chase works with Maxie on some moves. Chase tells the ladies if they aren’t scared, they aren’t listening and wants to practice with everyone. Chase ends the class, and Maxie asks if she’s ready to kick some ass. Chase says he wouldn’t mess with any of these women. Chase asks Willow out on a date, Willow says now, she could use a drink.

General Hospital’s Curtis (Donnell Turner) joins Jordan (Briana Nicole Henry) at the PCPD and asks if she is alright. Jordan thanks him for coming, he’s always been her favorite person to bounce idea’s off of, and she needs a breakthrough. Jordan says they need to squash some of the panics over the serial killer. Jordan wants to test “Kevin’s” (Jon Lindstrom) theory about the killer wanting to impress them. Jordan and Curtis have a list of names; Laura is on the list,

Curtis suggests she knows the killer and doesn’t realize it. Jordan and Curtis realize that the victims all have Ryan Chamberlain in common. Jordan says all if this leads back to Ryan, Curtis asks if she thinks it’s a copycat murder. Jordan brings up another case and mentions red herrings.

Jordan gets a call that the footage is blank. Jordan and Curtis begin to go through police files on Ryan’s murders. Jordan is sure something is in the files, suddenly she stops, and Curtis asks if she’s found something, Jordan tells him it’s what she didn’t find that alerted her. Jordan and Curtis discover that none of Ryan’s victims had their license.

General Hospital’s Sonny goes to talk to Marcus (Nigel Gibbs) at Turning Woods. Marcus knows who Sonny is and has nothing to lose, Yvonne (Janet Hubert) isn’t herself around Mike (Max Gail). Marcus tells Sonny it is different for him because Mike is only there during the day. Yvonne lives there, and Marcus hardly recognizes her. Sonny tells Marcus he didn’t want Mike there in the first place, but Mike insisted.

Mike's worried he won't get to see Yvonne ever again. Can Sonny convince Marcus there's another option for her care?
Tune into an emotional, new #GH – STARTING NOW on ABC! #GH55 pic.twitter.com/w8WDXCEUfs

Stella (Vernee Watson) calls them coping partners. Sonny believes that Mike is helping Yvonne too. Marcus says this is a temporary thing, short-term. Sonny tells Marcus that short term is all they have. Sonny says he used to hold his breath when he saw Mike because he didn’t know if he would recognize him. Marcus and Sonny agree that you never forget the first time they don’t recognize you. Yvonne comes in and demands to know where Mike is. Marcus tells Yvonne that Mike is with Stella.

Marcus calls Yvonne honey, and she tells him to stop, she wants Mike. Mike, Sonny, and Stella arrive at Turning Woods. Yvonne’s luggage is pack, but Marcus has decided to leave her there. Marcus says Sonny convinced him that if you love someone, you do what is best for them first. Mike and Yvonne are both glad that she is staying. Marcus wishes Stella had known Yvonne before.

Stella knows she must have been special because he married her. Mike has given Yvonne a scarf for Christmas. Yvonne is happy now. Marcus apologizes to Stella for lashing out at her. Marcus says part of him will always wonder what would have happened if he took Yvonne home. Sonny tells Yvonne the Mike thinks the world of her. Yvonne says the world is a pretty big place, and Mike disagrees, sometimes you can hold it in the palm of your hand. Mike takes Yvonne’s hand in his as Sonny and Stella look on.

General Hospital’s Stella and Mike are having pie while waiting to hear from Sonny. Mike wants to go back to Turning Woods. Stella says she can take Mike back, but things may be different. Mike remembers that Marcus said he was going to take Yvonne and leave and Sonny went to try to stop him. Mike asks Stella what happens if Yvonne is gone. Stella says Marcus is a loving person.

Mike doesn’t believe that because Marcus is trying to keep them apart. Mike asks Stella if she has ever been needed by someone. Stella tells Mike her nephews needed her. Stella says she felt that way a long time ago. Mike asks what happened, Stella says life happened, and that part of her life passed her by before she knew it.

Bold and the Beautiful Recap Friday, January 4: Hope and Liam Mourn For Their Daughter