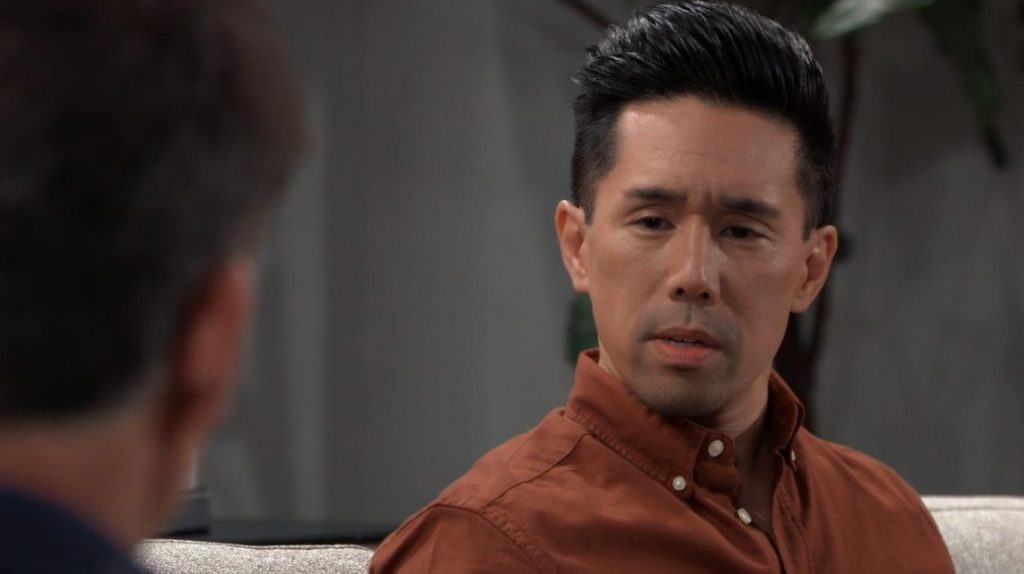 General Hospital spoilers for Monday, October 21 tease the beginning of another exciting week of drama and tense confrontation among the Port Charles residents for General Hospital fans!

Ava Jerome (Maura West) is confrontational as she accuses Dr. Lucas Jones (Ryan Carnes) and her therapist, Dr. Neil Byrne (Joe Flanigan) of thinking she’s crazy! She lashes out, exclaiming, “You think I’m having a nervous breakdown, is that it?!”

She is perfectly normal to be frightened after finding out her ex-lover, Ryan Chamberlain (Jon Lindstrom) murdered his cellmate, Bryce Henderson (Brian Gross) in Pentonville Prison because of her! Viewers will recall that Bryce had said some rather lustful things about Ava, seeing her on the Crimson magazine cover hung on the cell wall by Ryan and had given Ryan too much information about his prison status and that he would soon be out!

Later, at General Hospital, Brad Cooper (Parry Shen) is offended at Julian Jerome’s (William DeVry) remarks about the flowers he received in Friday’s episode at work. They arrived with his husband, Lucas, looking on. Brad doesn’t have a clue who sent them because there was no card attached to them, and he is offended when Julian must think he has a lover; Brad asks Julian, “You seriously think I’m cheating on your son?” The only person he can think may have sent them would be Nelle Benson (Chloe Lanier) for speaking in her favor at her parole hearing, as a thank you.

Curiosity is probably not the best word for Hamilton Finn’s (Michael Easton) motive for questioning Curtis Ashford (Donnell Turner) but it will suffice! Finn knows that Hayden Barnes (Rebecca Budig) has been lying to him and suspects she had the baby that she miscarried, which is his child too!

He asks Curtis if he knows anything about what Hayden was doing while she was gone, since he knows Curtis was one of Hayden’s few friends while she was living in Port Charles before. Viewers will recall that it was Curtis who went looking for Hayden after she was a runaway bride at she and Finn’s wedding, and tracked her to a hotel where she found the note left for Finn about the miscarriage, and it was also Curtis who received the letter from Hayden when she was in Rome, wanting Finn to meet her there!

Meanwhile, Hayden’s half-sister, Elizabeth Baldwin (Rebecca Herbst) with whom Hayden is living now, is supportive of her, telling her she thinks that Hayden would be a wonderful mother! But how much did Hayden tell Liz – was this just a rhetorical question, or is she getting ready to spill to her about Baby Girl Finn? Viewers will have to “tune in tomorrow” – or Monday, for the answer!

Carly Corinthos (Laura Wright) is obviously “mama-bearing” when she approaches Sasha Gilmore (Sofia Mattsson), who is with Michael Corinthos (Chad Duell) at the Metro Court; she smiles but viewers can tell it’s not because she’s happy about the situation of her son dating a fraud! She tells Sasha that she thinks they are long overdue for a chat! Sasha looks a little intimidated, but Michael is with her for support even if his mother tries to break them up on the spot!

At the Crimson Magazine offices, Jasper “Jax” Jacks (Ingo Rademacher) is inquisitive as he asks Nina Reeves (Cynthia Watros) if something happened with her and Valentin Cassadine (James Patrick Stuart)! The last thing Jax knew is she spent the night on his couch after she left Valentin at the altar devastated! Nina smiles slyly, making Jax, and General Hospital viewers wonder exactly what she’s up to!

Days of Our Lives Spoilers: Dr. Rolf Threatens Jennifer, Does Her Snooping Put Her in Danger?