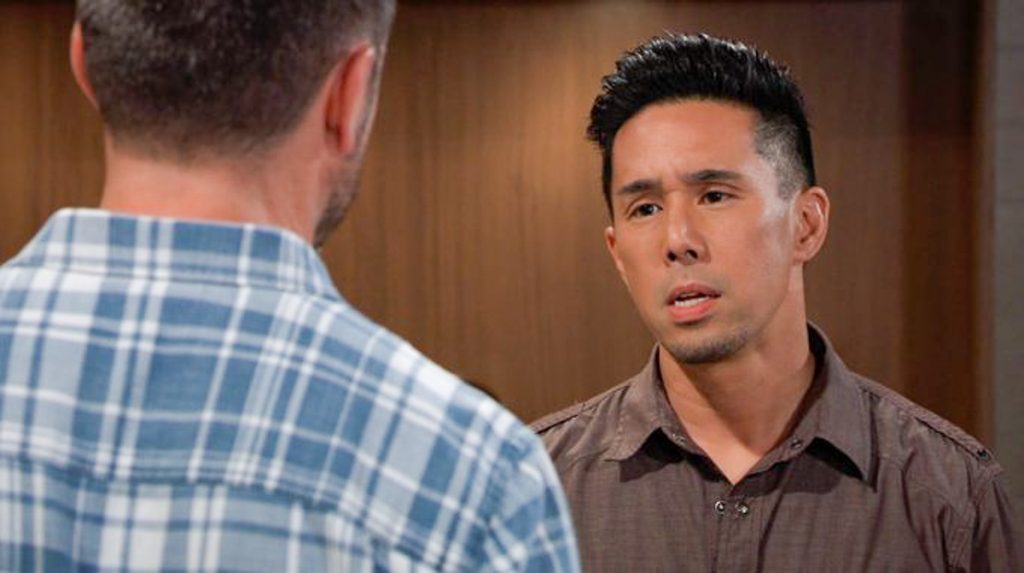 Brad Cooper (Parry Shen) pleads with his husband, Lucas Jones (Ryan Carnes) to believe him when he says he would never cheat on him! In a continuation of the argument the two started having on Friday, November 1, things are escalating a bit because Brad can’t prove that he’s not cheating on Lucas, when every bit of available evidence is telling Lucas that he is!

First flowers from an unknown sender and then a nude photo of someone sent to Brad’s phone plus Brad’s changing his phone password tells Lucas his husband is cheating! Worse yet, when Brad tries to prove he’s not by sending a “who is this” message back to the sender of the nude photo, he texts him back, “You know who this is!”

GH Spoilers – Laura Collins Can Do This

Laura Collins (Genie Francis) who is probably still a bit disturbed by Ava Jerome’s (Maura West) tale of seeing Nikolas Cassadine (Marcus Colona) alive, is talking to someone, possibly about Ava’s supposedly imagined encounter. We can see she is talking to a man in a suit coat but we cannot hear his voice or see his face; however it does look like Jasper Jacks’ (Ingo Rademacher) suit coat he had on in Friday’s episode. Fans will have to “tune in tomorrow” – in this case, “tomorrow” is Monday – to see for sure who Laura is talking to! Whoever he is, she assures him that “she can do this”!

Sasha Gilmore (Sofia Mattsson) and Michael Corinthos (Chad Duell) are at Charlies’ Pub, obviously talking about Sasha’s having pretended to be Nina Reeves’ (Cynthia Watros) birth daughter for a little over a year, and her letting Valentin Cassadine (James Patrick Stuart) off the hook! She confirms she took all the blame! She only wanted Nina to be happy, and Valentin makes her happy so she didn’t want to mess him up!

Nina, meanwhile, still at the Metro Court, where the Halloween party is still in progress, blindsides Curtis Ashford (Donnell Turner) as Jordan Ashford (Briana Nicole Henry) looks on. Obviously she must have told him that she decided to drop the charges against Sasha as Curtis exclaims to her, “You’ve GOT to be kidding me!”

Back at Charlies’ Pub, Maxie Jones (Kirsten Storms), with Peter August (Wes Ramsey) by her side, reassures someone. She tells him or her that he or she are always going to be their friend, referring to her and Peter.

At the Corinthos house, Sonny Corinthos (Maurice Benard) and Carly Corinthos (Laura Wright) are obviously talking about her brother Lucas and his husband Brad, who were at their house earlier talking to Sonny and Carly. Sonny tells Carly whatever they’re fighting about is none of Sonny and Carly’s business, so Carly needs to stay out of it!

Jasper Jacks (Ingo Rademacher) talks to Nikolas Cassadine (Marcus Coloma) about a business deal they are apparently involved in together; could it have something to do with the painting of Helena Cassadine (Constance Towers) or the codicil to Mikkos Cassadine’s (John Colicos) will? Jax tells Nik, if it’s not going to be profitable, he’s out!

Days of Our Lives Spoilers: Jennifer Gets A Chance At Life – Shocking Discovery Made