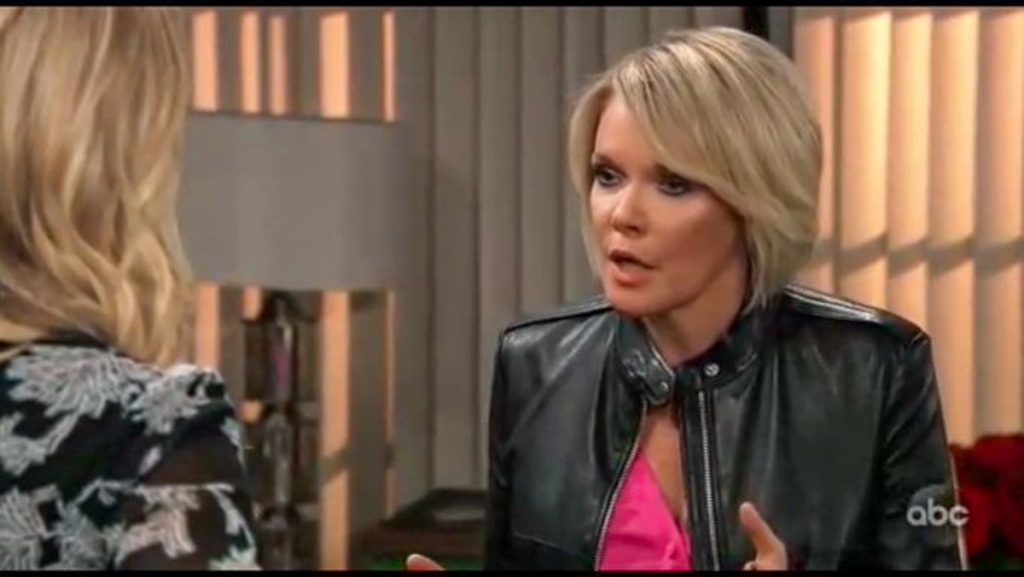 General Hospital spoilers tease that Ava Jerome (Maura West) will keep quiet about what she knows about Nikolas Cassadine (Marcus Coloma) in upcoming episodes of GH!

Ava saw Nikolas shot with her own eyes a little over three years ago, on Cassadine Island by his uncle Valentin Cassadine (James Patrick Stuart) and he took a fall out a high window towards the rocks below. Obviously, Nikolas has survived, and even though he showed Ava his face at her art gallery on Halloween night, he stole away into the night and had disappeared nearly as quickly as he appeared! But, at least she saw he had two hands and he wasn’t Ryan Chamberlain (Jon Lindstrom) with a prosthetic, although the shock of seeing him alive when he’d been presumed dead for over three years did knock her for a loop! For whatever reason, Nikolas has kept his survival secret up until now from everyone, including his own mother Laura Collins (Genie Francis) and possibly even his son, Spencer Cassadine (Nicolas Bechtel)!

Ava and Nikolas, although they were only together for a relatively short time, really seemed to form a bond with one another through their run from a strange little man named Huxley Lynch (Trent Dawson) and short captivity by him for Ava’s accused theft of a family heirloom of his, a small sculpture called “The Weeping Nyad!” It is obvious they still have that bond with one another or Nik wouldn’t have been following her around for a week or so. We don’t know yet about what he has been up to during his time presumed dead, although General Hospital seems to be indicating that it WAS his hand that was on Cassandra Pierce’s (Jessica Tuck) knee when she was intercepted between the Canadian clinic where Dr. Hamilton Finn (Michael Easton) was lured after Anna Devane (Finola Hughes) was kidnapped. Anna, however wasn’t a target , they only wanted Cassandra out of her coma, which she went into as a result of being stabbed with her own syringe in a struggle with Nina Reeves (Finola Hughes). Cassandra was supposed to be on her way to a WSB facility but instead was intercepted and the first day Nik appeared the flashback scene of Cassandra’s interception was shown.

General Hospital viewers will also recall that it was Ava’s fond memories of and obvious intact bond with Nikolas that led to Jason Morgan’s (Steve Burton) freedom; when she went to the Boronsky Clinic in Russia to get her face fixed after suffering severe burns, it was Valentin who actually paid for her surgery and referred her to a doctor there, and she became curious about “Patient Six” and befriended him. She thought, and obviously hoped, she’d found Nikolas, but it turned out to be Jason Morgan – and she was instrumental in helping him escape anyway, even though he wasn’t Nikolas and she didn’t know anything about the real Jason Morgan then. She had only known his twin, Drew Cain (Billy Miller) who, at the time, along with the rest of Port Charles, thought he was Jason. Because of that bond, even if Nikolas is still keeping a low profile for whatever reason, she will keep his secret to keep him safe; until the next time he appears or is able to come out in the open!