At the Metro Court, Laura Collins (Genie Francis) is concerned that her granddaughter, Charlotte Cassadine (Scarlett Fernandez) may have developed a case of post-traumatic stress disorder from her experience of being kidnapped by Cassandra Pierce (Jessica Tuck).

Charlotte again talked to her about her “bodyguard” and Laura thinks she’s imagining him, not having any idea that it is really her presumed-dead son Nikolas Cassadine (Marcus Coloma)! She talks to someone about Charlotte, but will it be Nina Reeves, (Cynthia Watros), her daughter Lulu Spencer (Emme Rylan) or Charlotte’s papa, Valentin Cassadine (James Patrick Stuart)?

Meanwhile, Charlotte is nosy! Also at the Metro Court, her mother Lulu arrives with her date Dustin Phillips (Mark Lawson) and she asks her mother “Are you going to have a sleepover with Dustin?” to a shocked Lulu! The old saying really is true, “Kids say the darndest things!” Dustin looks shocked as well, and looks over at Lulu with a concerned look on his face as if to ask how were they going to answer that question! If some of these “sleepovers” have been in Lulu’s house, they may be wondering if Charlotte had been a little peeping Thomasina some of those times! 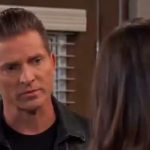 As Elizabeth Baldwin (Rebecca Herbst) and her son Cameron Webber (William Lipton) wait for Franco Baldwin (Roger Howarth) to wake up from the memory transfer reversal procedure, Dr. Andre Maddox (Anthony Montgomery) comes out to update them after Franco is done with the MRI he ordered. There must be some question as to if Franco does not wake up or is found in a vegetative state, and Andre advises them that Franco, as Drew Cain (Billy Miller) signed a do not resuscitate form, more commonly known as a DNR, before he went under.

The question is, did he sign it with Drew’s name or with Franco’s? If he signed with Drew’s name it may not be valid! A DNR form is to show a patient’s wishes not to be kept alive by extraordinary means such as life support should something adverse take place!

It looks like Nina Reeves (Cynthia Watros) and Ava Jerome (Maura West) are at the party before the auction that Ava has set up to sell Helena Cassadine’s (Constance Towers) portrait, and are toasting to “that.” Curtis Ashford (Donnell Turner) walks up and asks what “that” is! As General Hospital viewers know, “that” is a plan to take down the Cassadine boys, Valentin and Nikolas!

Perceptive viewers will have noticed that the portrait is no longer in its frame, and with the exception of Laura, who may realize that the codicil to Mikkos Cassadine’s (John Colicos) will, disinheriting Valentin, could have been between the painting and its frame, Valentin, Nikolas, and possibly Jasper “Jax” Jacks (Ingo Rademacher) who as Laura would be acting in Spencer Cassadine’s (Nicolas Bechtel) best interests, think the map to the codicil lies in the clues painted into the J. Garrin painting. Or, Ava may have found nothing between the painting and the frame and tells Nina but no one else – Helena herself couldn’t have thought up a better wild goose chase!

After Jason Morgan’s (Steve Burton) pleas to Anna Devane (Finola Hughes) in Friday’s episode to investigate her son for being behind various crimes such as putting hits out on Franco, Andre, and Drew Cain, Anna hesitantly starts asking Peter August (Wes Ramsey) some pointed questions. She wants to believe the best of him, but Jason really put her to thinking. Peter covers, saying, “You don’t think I’m lying to you, do you?” Anna’s likely thinking he’s way too defensive, and as she told him the other day, he has way too many “tells”!

Jax is frustrated, as always, with Nikolas; and it looks like they are in the storage room in the back of Ava Jerome’s art gallery as he tells him to stop interrupting so he can make something happen! They are probably talking about the auction Ava set up of Helena’s portrait and trying to get the codicil into Nikolas’ hands so he can get his money and estate back from Valentin. However, Jax too will be on a wild goose chase if the codicil was behind the painting in the frame since it, and the codicil if it even exists, was removed!

Meanwhile, Valentin, also at Ava’s gallery for the auction is ready; and he’s ready to outbid anyone and everyone to get his hands back on that painting! He says, let the best man win, of course assuming that he is the best man!