From behind a closed gate to the yard of Wyndemere mansion, Charlotte Cassadine (Scarlett Fernandez) whispers loudly, “I know who you are!” She is likely talking to her “bodyguard” Nikolas Cassadine (Marcus Coloma) who has likely tried to sneak into the mansion again only to be stopped by Charlotte, who probably knows about the tunnels that her Papa doesn’t.

She will probably tell him that not only does she know that he is not her bodyguard and that her Papa didn’t hire him, but she knows he is her uncle because he saw his picture on her mother’s phone!

At the offices of Crimson Magazine, Jasper “Jax” Jacks (Ingo Rademacher) warns Nina Reeves (Cynthia Watros) about a situation. Perhaps he is hinting that Nikolas is alive (as he only too well knows but isn’t aware that she already knows!) as he tells her that she has to be troubled by that possibility; of course the possibility he would be referring to is that Valentin Cassadine (James Patrick Stuart) might lose Wyndemere and everything he thought was his! 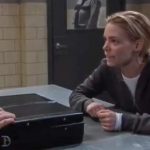 At Kelly’s, Curtis Ashford (Donnell Turner) advises Laura Collins (Genie Francis) that maybe it’s time to look a little closer to home, and he is probably referring to the portrait of Helena Cassadine ( Constance Towers) that he knows Laura has been looking for, although he still doesn’t know anything about the codicil to Mikkos Cassadine’s (John Colicos) will contained within.

At General Hospital, Jason Morgan (Steve Burton) approaches Anna Devane (Finola Hughes) with some suspicions he has. General Hospital viewers will recall that Samantha McCall (Kelly Monaco) is in prison for killing Shiloh Archer (Coby Ryan McLaughlin) with a flare gun in Jason’s defense, when he had him down on the deck of the Haunted Star and was holding a gaffing stick over him. Jason obviously is asking for Anna’s help as he tells her “he’s the reason Sam’s in prison” and he may be connecting the dots between Drew Cain’s (Billy Miller) kidnapping out of Afghanistan by Shiloh and Peter August’s (Wes Ramsey) involvement.

Elsewhere at General Hospital, Peter updates Elizabeth Baldwin (Rebecca Herbst) about his shooting the gunman, who he actually hired, and saving Andre Maddox (Anthony Montgomery) and Franco Baldwin’s (Roger Howarth) life in the operating room. He tells Elizabeth he just did what he had to do.

At the Corinthos house, Sonny Corinthos (Maurice Benard) is upset as he accuses Carly Corinthos (Laura Wright) and Jax of lying to him for weeks! General Hospital viewers will recall that Josslyn Jacks (Eden McCoy) wasn’t able to move in with Jax, her dad, because Nikolas was living with him at the time; Carly told Sonny that she thought Jax had a girlfriend and wanted his privacy. Nikolas revealed himself when Carly was at Jax’s house and swore her to secrecy. Sonny’s all worked up because he isn’t buying what Carly and Jax have been selling!