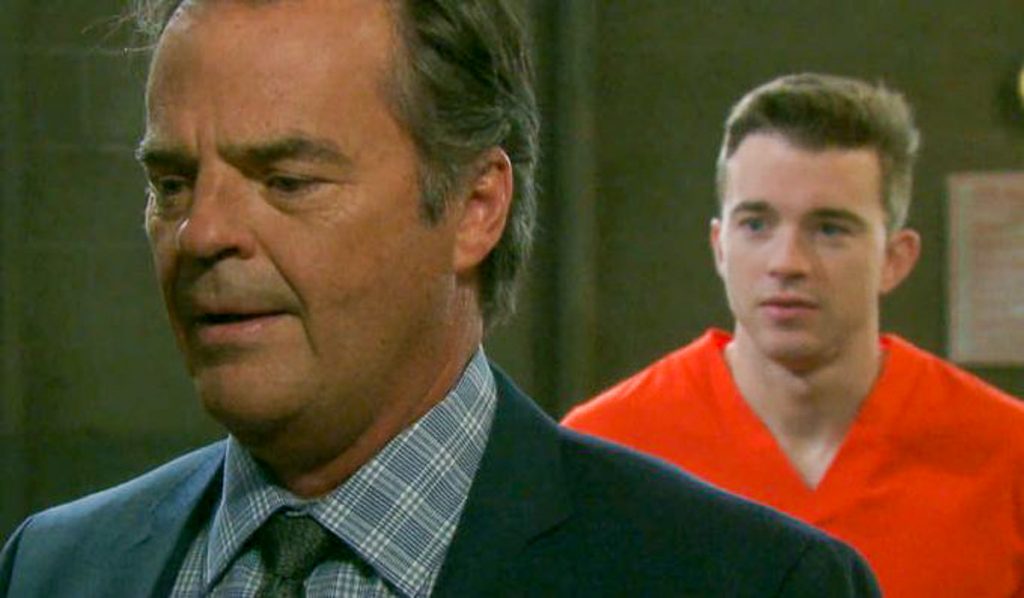 Clyde Weston, (James Read) who has just gotten out of solitary confinement for having a knife and trying to kill Will Horton (Chandler Massey) and his son, Ben Weston (Robert Scott Wilson) reams Ben out for betraying him.

Days of Our Lives viewers will recall that when Ben and Clyde were caught, with Ben having a bad cut to the wrist, Ben told the truth about the attack instead of taking the fall for Clyde or trying to cover for him. Clyde, of course is used to being king of the prison with most everyone including a couple of the guards answering to him, so to be sent to solitary because of his own son telling the truth is betrayal as far as he is concerned! Clyde really reams Ben out!

It would appear that the doctored security cameras tape from the night that Jennifer Deveraux (Melissa Reeves) was pushed over the balcony railing of The Bistro has been re-doctored by the time DiMera’s IT department looks at it; but Eve Donovan (Kassie DePaiva) is cleared because of it. However, it still does not show the true perpetrator, Princess Gina Von Amberg (Kristian Alfonso) also known as Hope Brady! Instead, Princess Gina and Stefano DiMera (Stephen Nichols) threw Dr. Wilhelm Rolf (William Utay) under the bus as Eve’s image has been replaced with his! However, Stefano arranges for Rolf to be spirited away before charges can be brought against him!

Back at Statesville Prison, Will has made a very difficult decision as he requests a visit from his husband, Sonny Kirkiakis (Freddie Smith). As Days of Our Lives viewers will recall from previous episodes, Will’s grandmother, Kate Roberts (Lauren Koslow) had come to visit him and warned him that Sonny had a new “friend” and if he didn’t fight for his marriage, he would lose Sonny!

Will knows that Sonny will never be able to get past Will having been responsible for the death of his mother, Adrienne Kiriakis (Judi Evans) even though it was an accident – Will still blames himself. So he makes the difficult sacrifice of asking Sonny for a divorce, since he will be in prison for a long, long time and he doesn’t want Sonny to spend his life alone.

Days of Our Lives #DOOL Spoilers: Gabi Tries to Evict Chad From Mansion, But DiMera Puts Up A Fight @celebratesoaps https://t.co/MmUDnEwP3e

Ciara Brady, (Victoria Konefal) even after being warned by both Ben and Justin Kiriakis (Wally Kurth) that continuing to play detective to gather evidence against Xander Kiriakis (Paul Telfer) and her grandfather Victor Kiriakis (John Aniston) could be very dangerous, still continues playing detective! Ben and Ciara believe, based on Ben having asked Victor to put a hit out on his late sister Jordan Ridgeway (Chrishell Stause) and then changing his mind, and Victor having had Xander bring Ben to the Kiriakis mansion where Victor tried to strangle him, and would have if Brady Black (Eric Martsolf) hadn’t have walked in, that they are responsible for Jordan’s death and Ben being framed for it! Ciara plays detective again and is caught by Xander, who thwarts her plan!