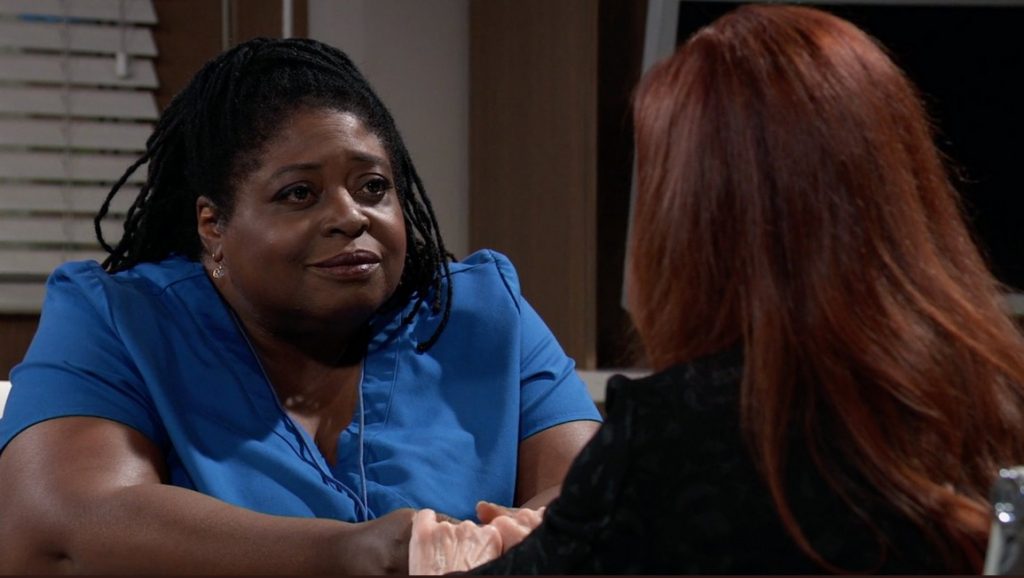 There’s a catfight brewing at General Hospital, and Epiphany will be the one who will have to stop it! There have been many catfights among many nurses and doctors, and sometimes even patients at GH over the years, and many romantic rivalries, as longtime GH viewers will recall! This certainly won’t be the first situation Epiphany has had to intervene in, either! One time she kicked out a nosy reporter who was trying to report on a situation between the Spencers and the Cassadines and harassing Nikolas Cassadine (Tyler Christopher) about it.

GH Spoilers – Elizabeth Baldwin And Kim Nero Are At Odds

Even though Franco Baldwin (Roger Howarth) has been in Shadybrook Sanitarium as of late, the Chief of Staff, Monica Quartermaine (Leslie Charleson), Nurse Elizabeth Baldwin (Rebecca Herbst) and former General Hospital OB/GYN Kim Nero (Tamara Braun) have been at odds over Franco ever since he was the victim of a memory transfer of Drew Cain’s (Billy Miller) pre-2012 memories and partially his personality as pre-2012 Andrew Cain (Steve Burton).

The conflict has become even more pronounced between the three women now that Drew has been declared dead, and Kim, who has become unbalanced and delusional, has slept with Franco believing he really is Drew, and even retained an attorney to stop any attempt by Dr. Andre Maddox (Anthony Montgomery) to reverse the memory transfer, citing that Franco’s human rights are being violated by trying to stop him from identifying as Drew, and that forcing Drew to be returned to his physical identity of Franco mentally is also a violation of his human rights.

Monica, while not off the deep end like Kim, still is hesitant to lose what is mentally left of Drew in Franco, because she’s just not ready to let Drew go until she has had a chance to know all about him and the past that physical Drew was unable to remember and make peace with his presumed death. Elizabeth, on the other hand, has been adamant that no one should encourage any part of Drew in Franco, and to only encourage Franco to reappear as Franco and not humor him in treating him as Drew!

Monica and Kim both fear the risks, and Elizabeth tries not to and to believe only that the procedure will achieve the desired results! The scenario that all three women could be close to the Nurses’ Station and get into a catfight over “Frankendrew” is quite likely, with Kim possibly hunting down Liz at work to tear into her, and Monica being nearby and getting in the middle and then Epiphany having to keep the peace and be the voice of reason between all three of them! Then again, this could take place in the court during the decision of whether to allow this procedure to be done on Franco or not! Either way, it will be an epic scene!