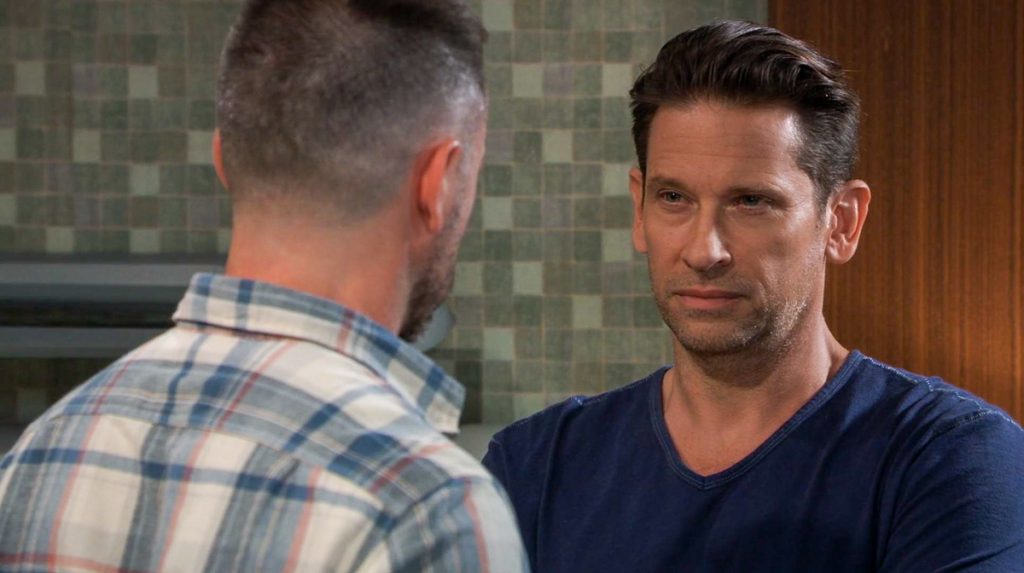 Franco Baldwin’s (Roger Howarth) competency hearing will be coming up soon and Julian may attend as an interested party, considering he paid “Frankendrew” an unexpected visit recently. He could also be called as a witness to testify of Kim Nero’s (Tamara Braun) mental state and the bearing that Franco “believing he is Drew” has had on her and on their relationship breaking apart.

He would be testifying for Elizabeth’s side of the hearing, not for Kim’s, who hired Martin Gray (Michael E. Knight) to keep Franco from being restored to himself since she wants him to stay pre-2012 Andrew Cain (Steve Burton) in his mind and believes his rights are being violated by being forced to become someone he is not. When Elizabeth gets on the stand, she will testify how hard she is fighting for her husband and her marriage, and it will put Julian to thinking – and remembering – and her words will resonate with him.

Julian will think about his relationships and what might have happened if he had fought as hard as Elizabeth is for Franco and her marriage to him. The only time that Julian has been actually married though is when he and Alexis Davis (Nancy Lee Grahn) were married – and he didn’t fight to stay married to her at all! As time has gone on, he has fought in her behalf in various situations, such as staying with her to help her stop drinking and throwing all the liquor away in her house, and she has for him, such as when she got him released from prison when she saw his life was in danger there.

She always has his back, and he always has hers – why didn’t he fight harder to keep her? Perhaps if he had tried harder to work things out, and had not done stupid things as he had when he allowed himself to be controlled by his older sister – the crazy one – Olivia Jerome (Tonja Walker) – they could have worked things out.

After all, even after the stupidest thing he did – threatening Alexis with the dagger used to kill her mother – which she stabbed him in the back with after Sonny Corinthos (Maurice Benard) came to the rescue – Alexis is still his friend and takes concern for him! True, there was a lot to overcome – but he could have fought to keep his marriage and to keep Alexis if he’d have tried before loony Olivia came back “from the dead”!

As far as his other relationships – Cheryl Stansbury (Jennifer Anglin), his son Lucas Jones’ (Ryan Carnes) birth mother – he went into witness protection and faked his death, so there was nothing to do to keep that relationship intact, and he later heard she’d died after being hit by a car. Olivia messed up that relationship too! As far as Kim, he realized he could never compete for her with a ghost and still can’t!