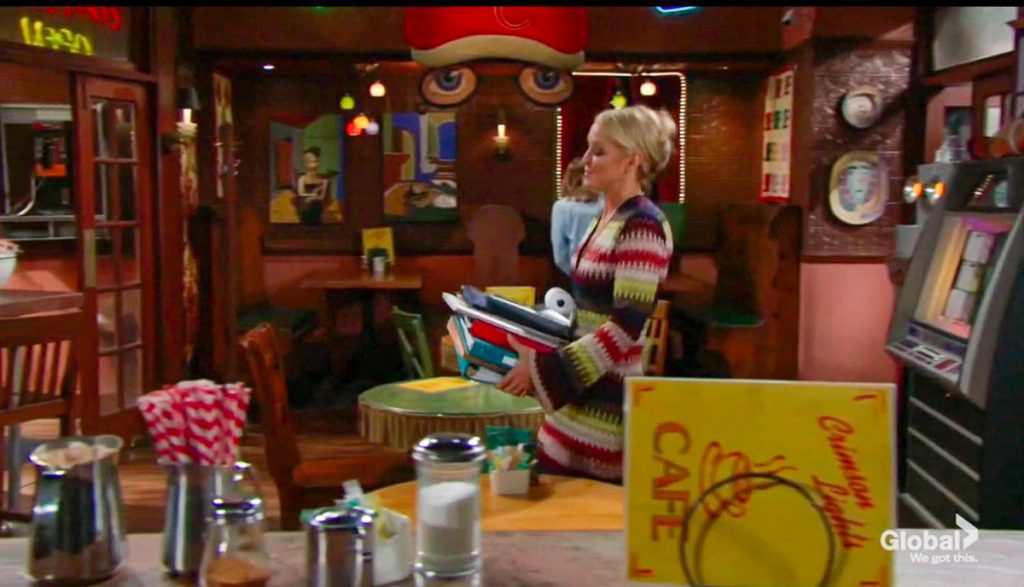 The Young and The Restless (Y&R) spoilers tease that this will be a fun-filled week, with makeups, breakups, and shakeups among the Genoa City power players and drama and fun for Y & R fans!

The new promo starts at Crimson Lights, with Sharon Newman (Sharon Case) flashing a playful smile at Rey Rosales, (Jordi Vilasuso) who stops in for coffee and a date. Meanwhile, back at the Abbott residence, Jack Abbott (Peter Bergman) has some fun with Traci Abbott (Beth Maitland) as he goes through a box of old photos, photo albums, and other Abbott family memorabilia while researching for their family book. Maybe he’s remembering the two of them in younger years playing pinball as he points at her and shouts, “DING DING DING DING DING!” which makes her laugh!

Chelsea Boudreau, (Melissa Claire Egan) who has been mad at and on the outs with Nick Newman (Joshua Morrow) since being left out of the loop on Victor Newman’s (Eric Braeden) faked death and having to explain things to Connor Newman, (Judah Mackey) finally decides she can get glad in the same pants she got mad in – or maybe out of the same pants, as the case may be – as she tells Nick to hurry back, because they have a long night ahead as she slyly smiles at him! Nick looks back at her like he may not go where he was originally headed after all!

Dr. Nate Hastings (Sean Dominic) has a serious-sounding discussion with Abby Newman (Melissa Ordway) as he tells her they are just becoming too far apart; Abby looks somewhat confused and asks him if that is his way of saying it’s over! Apparently the secrets and the fallout of the whole Victor-faked-his-death scenario have taken its toll on this former couple as well, or has another gorgeous young lady caught his eye and turned his head? Either way, it looks like Abby has lost her boyfriend!

The Young and the Restless Weekly Spoilers October 14 to October 18: Nick and Chelsea’s Romantic Time – Nate and Abby Break Up – Lola Could Be Pregnant #yr #youngandtherestlesshttps://t.co/TfEv0eeZCI

In the kitchen at Society, Lola Abbott (Sasha Calle) is looking rather green around the gills, and Abby is with her asking about her symptoms. When Lola tells her she’s dizzy and nauseous, Abby asks her if she could be – Lola fills in the blank – pregnant?

Later, Kyle Abbott (Michael Mealor) seems to be taking the situation in stride as he asks his father Jack a pertinent question – how would Jack feel about becoming a grandfather? Jack does look a little shook up and shocked! However, it hasn’t been all that long since Lola had a liver transplant with the help of Summer Newman (Hunter King) – the Abbott and Rosales families should make sure that it’s a baby and not a problem with the transplant that’s causing Lola to feel ill!

Stay tuned to The Young and The Restless and keep checking Y&R spoilers frequently for all the latest news, updates, and developments!

The Bold And The Beautiful Spoilers: Liam Uses Baby Beth To Get Steffy’s Help With Thomas — Guardianship Of Douglas?