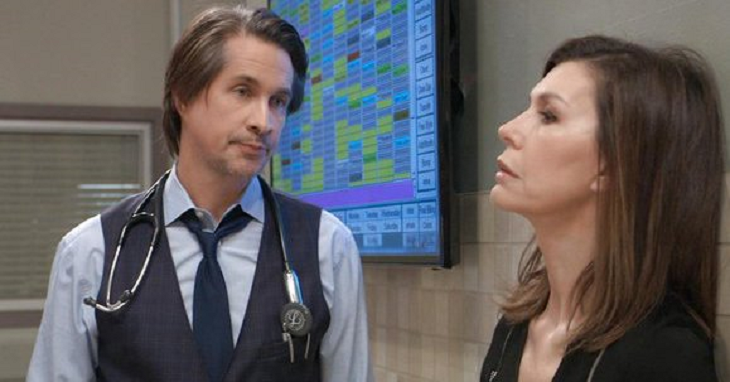 It’s also a good possibility that Anna’s twin sister Alex Devane Marick will be questioned about the twins study that led to the blindness virus, either in person or by phone. At the end of the February 25 episode, General Hospital viewers saw Dr. Arthur Cabot (Time Winters) make an excuse to a WSB agent that was supposed to escort him to Steinmauer Prison for holding.

From Cabot’s side of the conversation, one could deduce that the person on the other end of the phone, who Cabot called his favorite patient, had gone blind too, but that there was a cure. It’s highly possible he called Alex, after advising Anna to call her too about any strange memories Anna may have that she may think are actually Alex’s.

Cabot told Anna Alex’s memories had been transferred to her, although All My Children history indicates it may have been the other way around. We cannot be sure at this point if GH writers are changing or ignoring the Devane sisters’ history over on All My Children, although it is possible that their memories could even have been switched totally with each other’s!

That could be an interesting conundrum to solve, even though Cabot claims it was only a one way memory transfer and supposedly not successful at that. It may be Cabot that Anna suspects deception from.

Stay tuned to GH and keep checking General Hospital spoilers frequently to see what discoveries are made as the twins study and its history are explored.

General Hospital Spoilers: Will Kevin Make It Out Of Captivity Alive?